Halloween already seems like a distant memory, but it may have marked an interim bottom for the silver price.

The U.S. Dollar Index (DXY) – which measures the dollar against other currencies like the euro and Swiss franc – has also pulled back from 94.91 to 94.14 today (Tuesday, Nov. 14). Meanwhile, the Dow Jones has been largely flat this month, down a small 0.07% since Nov. 1.

As much as silver prices may be a bargain today, it's silver stocks that deserve the most attention right now…

Other than uranium, I can hardly think of a sector that's been beaten down by traders like silver has. The Global X Silver Miners ETF (NYSE Arca: SIL) – which tracks the performance of silver mining stocks – is down 11.4% over the last month, to its lowest level since April 2016.

The value of the silver stock sector right now makes for one of my most promising predictions of the year.

First, let's take a closer look at the silver price's performance over the last week…

The price of silver's decline continued into Friday, when the metal repeated behavior from the previous session. The metal opened above the $17 level again, at $17.06, before falling below it again, to $16.87, by the close. That marked a 0.6% drop on the day, which happened even as the DXY tumbled from 94.44 to 94.39. 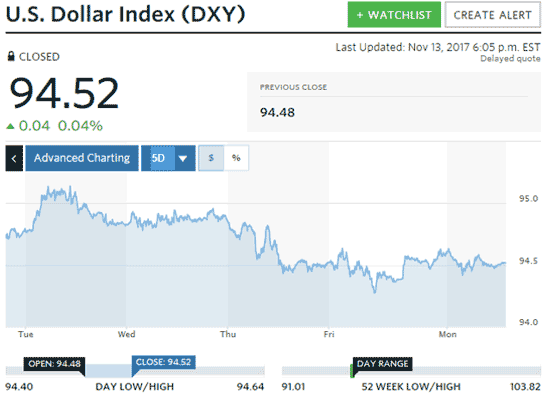 Despite being on track for a weekly loss, I think silver's recent performance shows a bullish pattern forming. That's why I think my bullish silver price target is still attainable before the end of the year.

But, as I mentioned earlier, I believe silver stocks have even more promising potential, which is why I'm going to show you my extremely bullish silver stock forecast for the rest of 2017…

My Bullish Forecasts for Silver Prices and Silver Stocks Before 2018