Like most leaders in the banking industry, Morgan Stanley Chair and CEO James Gorman was hesitant to give Bitcoin an endorsement.

In a conversation with CNBC this morning, Gorman said that cryptocurrencies do not "deserve the attention they are getting." 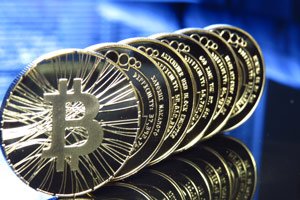 He also argued that anything that increases in value by more than 700% in a year is "by definition speculative."

But Bitcoin did receive a surprisingly bullish note by investment bank Goldman Sachs Group (NYSE: GS). Goldman Sachs Vice President Sheba Jafari wrote that the markets may see consolidation around the $8,000 level, and the price should climb higher.

The optimism comes a day after payment-processing giant Square Inc. (NYSE: SQ) announced it was incorporating Bitcoin into its platform.

Below is a recap of the top cryptocurrency prices at 12:00 p.m. EST

On Thursday, the market capitalization of the global cryptocurrency sector hit $221.84 billion.

With the Ethereum price locked in the $335 range, we're going to turn our attention today to a cryptocurrency that you've probably never heard of.

It's called Zeusshield, and its price has increased by more than 100% in the last 24 hours.

So, what in the world is Zeusshield?

It's a peer-to-peer platform that centers on the global insurance business.

The offspring of Bitcoin's August hard fork has experienced significant volatility in recent days. The downturn came despite news that Blockchain Wallet has announced plans to provide full support to BCH by 2018.

The Ripple coin topped $0.23 after a 10% surge during Thursday trading. The price surged after credit card giant American Express Co. (NYSE: AXP) announced it has established a payments corridor between the United States and the United Kingdom using Ripple's technology.

The platform enables the transfer of payments across the Atlantic Ocean in just seconds.

The platform has the capacity to completely revolutionize trans-Atlantic payments.

More Regulation on the Horizon

Another day, another nation making headlines for trying to regulate the Bitcoin world.

This morning, the Supreme Court of India has asked the Modi government to regulate Bitcoin. The request comes after a petition circulated the country asking leadership to look into concerns around the untraceable nature of Bitcoin transactions.

The petition explicitly focused on how Bitcoin can be used for tax evasion and demands in ransomware attacks.