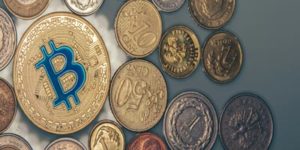 Moas stated that he is "not trying to be a hero and compete with people on the Internet for who has the highest Bitcoin price."

However, he did argue that with more than $200 trillion in assets around the globe, just a 0.5% migration of those assets into Bitcoin would create a $1 trillion valuation. This figure, he notes, would create a higher valuation than Apple Inc. (Nasdaq: AAPL).

On Monday, the market capitalization of the global cryptocurrency sector hit $242.63 billion.

Markets are still speculating on whether Goldman Sachs Group (NYSE: GS) will initiate coverage on Bitcoin and other cryptocurrencies in the near future.

Moas told me that no investment bank wants to be the first to jump into the pool.

However, he suggested that once a major financial institution begins to cover Bitcoin, many will follow.

With the Ethereum price above $360 per coin, markets are speculating on the project's efforts to launch and test its "Casper proof-of-stake protocol."

The price of Ethereum has broken higher by more than 16% over the last few weeks after trading remained locked in a range between $290 and $310.

The price of Bitcoin Cash remains under pressure after it fell more than 50% from near-term highs.

The cryptocurrency has been locked in a fork battle over the last week.

Litecoin prices are still well below their all-time highs, reached earlier this summer, when the price topped $92.00

The price of Bitcoin has also rallied in recent weeks thanks to increased optimism over long-term futures contracts tied to the commodity.

Over the weekend, Ledger X initiated its first Bitcoin futures contract, setting the price at $10,000 for an expiration date of Dec. 28, 2018.

The buyer of the contract will only make money should Bitcoin's price surpass $10,000, but this price level suggests markets have confidence Bitcoin prices will only continue to climb.