Still, the Nov. 3 low of $1,269 has held up so far, and the metal has managed to consistently establish higher lows since then. This has led to an overall gain of 1.4% in November so far, with the metal posting a huge 1.8% rise just last week alone.

We see a similar pattern emerging in gold stocks. The VanEck Vectors Gold Miners ETF (NYSE Arca: GDX) – which tracks gold mining stocks – hit a bottom on Oct. 26, and then a higher low on Nov. 7

Right now, gold sentiment is extremely bearish, and it's little wonder. Stocks are at all-time highs, oil prices are near two-and-a-half-year highs, and Bitcoin just smashed through the $8,000 level.

Gold has become an afterthought as other areas of the market receive more attention.

But remember, this is exactly the kind of environment where new bull rallies are born. When the least number of participants are interested, that's when assets tend to begin fresh ascents.

All of this should add up to a rally for gold prices through the end of the year. That's why I'm giving readers my bullish target for the price of gold before 2018.

First, let's take a closer look at last week's 1.8% gain, which led gold to hit its highest level since Oct. 16… 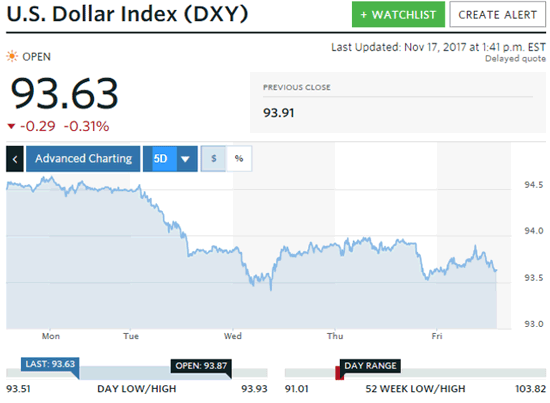 Wednesday's gold action was almost the complete opposite of Monday's. The DXY remained stable, moving sideways from 93.83 to 93.81 throughout the day. Except, unlike Monday, gold prices dropped back below the $1,280 level. They eventually settled 0.4% lower, at $1,278, by the end of the day.

The metal had an uneventful session on Thursday, especially with the DXY largely flat yet again. The index saw a small bump from 93.81 to 93.93, which caused the price of gold to close at the previous day's close of $1,278.

It wasn't until Friday, Nov. 17, that gold price action really heated up…

Gold has been beaten down from its $1,351 peak on Sept. 12, but remember, it's still up 12% so far this year. This is considered the hallmark of an early bull market – when an asset continues to rise but the average investor doesn't even realize it.

I think the price of gold is set for a home-stretch rally in December. Here's how big I think that rally could be…