As Bitcoin prices climb closer to $10,000, investors are ramping up speculation on who exactly created the digital currency.

Now, there's a new theory that Tesla Inc. (Nasdaq: TSLA) founder and CEO Elon Musk is the creator of Bitcoin. 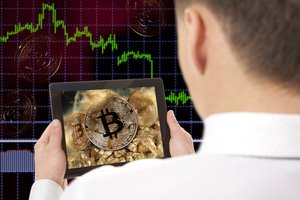 A former intern for Musks' other company, SpaceX, believes the visionary CEO also made Bitcoin in his spare time, according to CryptoCoinNews.com.

The intern suggests Musk's mastery of computer programming language and deep understanding of cryptography and economics could be evidence why he is the true creator.

While the debate rages on about who really created Bitcoin, we're focusing on the massive price movements...

Bitcoin's valuation of $160 billion has matched the market capitalization of General Electric Co. (NYSE: GE), a firm with nearly 300,000 employees and roughly $120 billion in annual revenue.

On Monday, the market capitalization of the global cryptocurrency sector topped $300 billion.

Bitcoin Is Now Worth More Than The Walt Disney Company

Bitcoin is also ranked as the 30th-largest currency on earth, surpassing the likes of local currencies in Singapore and the United Arab Emirates.

In an interview with CNBC, Nuveen Asset Management's Chief Equity Strategist, Bob Doll, said that Bitcoin has seen "an amazing run," but he believes that the current price point "feels speculative."

The Ethereum price hit an all-time high over the weekend of $488. The rally coincided with calls from hedge fund manager and cryptocurrency enthusiast Mike Novogratz's prediction that Ethereum would hit $500 by the end of the year.

On Thanksgiving, Ethereum topped $400 for just the second time ever. The rally has been fueled by increasing interest in the underlying blockchain.

Bitcoin Gold has retreated from its Nov. 24 record high of $413.74. Despite falling to just above $360, Bitcoin Gold maintains a market capitalization over $6.06 billion.

Stocks Continue to Surge Thanks to Bitcoin Mining

Shares of NVIDIA Corp. (Nasdaq: NVDA) hovered near an all-time high Monday thanks to surging demand for Bitcoin mining equipment.

"We are flagging this now, as the payback period has decreased materially which may lead to continued strength in GPU sales related to cryptocurrency mining," Steves wrote in a research note.