On the surface, this week's release of the last FOMC meeting minutes pushed the price of gold closer to the all-important $1,300 level once again.

But the effect was short-lived, and over the next couple of days, gold prices retreated back to around the $1,290 level.

Despite the limited reaction by gold, perhaps more important was the dollar's response.

The market seems to have focused on some Federal Reserve policymakers highlighting concerns over "persistently weak inflation data," possibly leading to a "decline in longer-term inflation expectations or may have done so already."

That smacked the U.S. Dollar Index (DXY) down 150 basis points over the past four trading days. As it turns out, the market's suddenly become a lot less certain of a December Fed rate hike, and it is likely factoring in an even more dovish rate-hiking cycle than before.

The DXY's price action bodes poorly for the dollar and bodes well for precious metals. We'll have to watch the dollar closely to see if its recent counter-trend rally has, in fact, come to an end.

But before we get into the outlook for gold prices, here's how the precious metal trended last week…

Why the Price of Gold Was Mostly Flat Last Week

Gold faced a strong headwind on Monday, Nov. 20, as the DXY launched a strong rally. That took it from around 93.6 in the very early morning to near 94.10 by early afternoon. That strength stifled the price of gold, which opened at $1,292 but rapidly sold off to $1,276 by 1:00 p.m. As the dollar remained high, gold was unable to regain any ground and closed at $1,276. 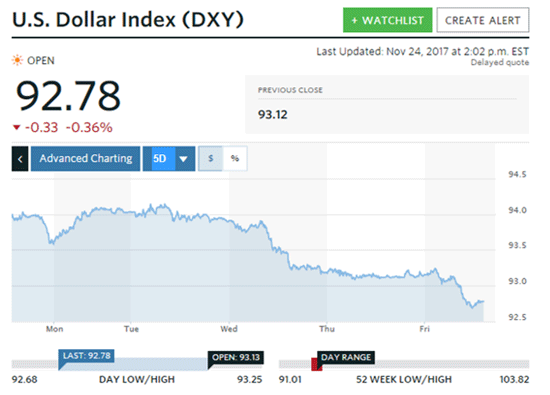 On Thursday, the dollar consolidated low around 93.15 for pretty much the entire day.  Consequently, gold looked pretty quiet too. It opened at $1,291, then, thanks to a shortened Thanksgiving trading day, ended at that same level.

So, where does all this leave gold as we head into this year's home stretch?

Let's first look at the dollar.