With the $10,000 milestone achieved, the question "Should I sell my Bitcoin?" will be on the lips of many investors in the cryptocurrency, especially if they're sitting on enormous, unrealized gains. 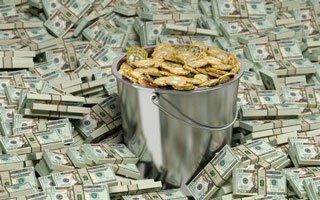 But cashing out everything might not be the best strategy.

Here's what you need to consider before selling your Bitcoin...

Should I Sell My Bitcoin Now? What You Need to Know

The first issue you need to look at is taxation. Yes, your Bitcoin windfall is taxable. According the IRS, cryptocurrency profits are considered capital gains.

The federal capital gain tax for most middle-class Americans is 15%. And that doesn't count state and local taxes - unless you're lucky enough to live in a state that has no capital gains tax (Texas, Nevada, South Dakota, Florida, Tennessee, New Hampshire, Wyoming, and Washington).

Most states take an additional 5%, although a few take quite a bit more. California, for instance, has no special treatment for capital gains, which means your gains will be taxed at the state's standard 13.3% rate. That's a big bite out of your Bitcoin bonanza.

Plus, a Bitcoin gain of hundreds of thousands of dollars could bump you into the higher 20% bracket. So if you have really large gains, you don't want to sell all of your Bitcoin in the same tax year.

And if you think you can cheat Uncle Sam by simply not reporting your gains, think again. Cashing out almost certainly will mean transferring your U.S. dollar proceeds to a bank.

By law, banks must report the deposit of any amount larger than $10,000 to the U.S. government (breaking up the amount into smaller deposits to evade the requirement is a crime). And banks may well report transactions far smaller than that, as Money Morning Capital Wave Strategist Shah Gilani found out a couple of years ago.

In short, the safest course of action is to pay taxes on your Bitcoin gains. Just make sure that when you sell your Bitcoin, you set aside 15% to 30% for your friends at the IRS.

But paying taxes isn't the only reason to think twice before cashing out your Bitcoin right now...

The Bitcoin Price Is Far from Its Peak

Although critics like to say Bitcoin is a bubble that will burst at any moment, they've been saying that at least since mid-2011, when the Bitcoin price spiked to a ridiculously high $30. 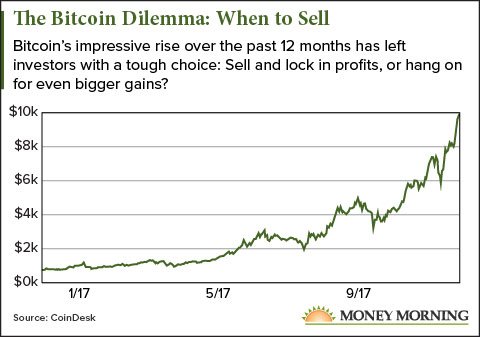 Several respected analysts see the Bitcoin price moving significantly higher from here. Hedge fund manager Mike Novogratz told CNBC this week that the price of Bitcoin could get to $40,000 by the end of next year.

Meanwhile, Ronnie Moas, head of Standpoint Research, told the CoinTelegraph he sees the Bitcoin price reaching $15,000 in 2018. But over the next five to 10 years, he sees much bigger gains.

Editor’s Note: Money Morning knows cryptocurrencies. We’ve been writing about them since 2011, far longer than most other news sites. To get 100% free, real-time alerts sent to your inbox sign up here.

So if cashing out of Bitcoin at $10,000 isn't the way to go, what should investors do instead?

You have a couple of options...

What You Should Do When the Bitcoin Price Hits $10,000

If Bitcoin will go mainstream and can be used just as cash or any credit card, than gains will be even higher.

I live in Utah and would like to know how to and possible suggestions on who to open a trading account with.

Bitcoin is useless for transactions. Transaction speed is way to slow and thats not going to change. Some other coin will replace bitcoin as king in the near future.

Should we invest at this 10K figure?

Trading (buy or sell) bitcoins at furcoins has given me a brand new experience of customer satisfaction in terms of prompt service delivery and an effective customer care service. These guys are very good.

Some say different but i say liviacoins .com is the best exchange to sell bitcoins.