Solar energy is going to lead the energy sector in growth over the next two decades, which will be a major catalyst for the best solar stocks to buy in 2018.

But that demand can’t be met with just oil, gas, and coal - the world’s “traditional” sources of power.

Solar is limitless, clean, and increasingly cheap. That’s creating an opportunity for the newest segment of the energy industry to explode in growth.

And it will make solar stocks hugely profitable…

Solar Energy Will Grow by 700%

Solar energy’s advantages over fossil fuels – its limitless supply and clean production – have yet to be fully realized because of its costs.

Money Morning Global Energy Strategist Dr. Kent Moors reports that solar energy has now reached grid parity with traditional energy sources, including gas and coal. That means it costs the same for a power plant to use solar power as its fuel source to generate electricity as it does to use coal, gas, or oil. 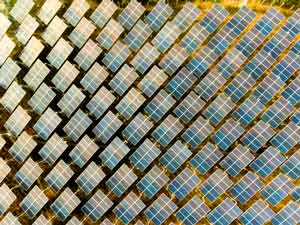 Now, solar energy is at grid parity in at least 20 states. And these aren’t small or rural states, either. New York, New Jersey, and California have all seen solar energy’s costs fall to meet fossil fuels’ costs.

That’s no surprise either, since the cost of solar energy has been slashed to 1/150th of what it was in the 1970s. And costs have fallen 10% in the last year alone.

Coupled with rising global demand for energy, solar power’s inherent advantages over fossil fuels, and its increasingly competitive costs means the solar industry – and solar stocks with it – are poised to see explosive growth.

The EIA is projecting solar energy production in the United States will soar a massive 500% by 2040.

And the best solar stocks will profit right alongside the industry’s incredible growth rate.

China Is Already the World’s Solar Leader, and It’s Only Getting Started

China is already a world leader in the solar energy market, but many don't realize the astounding rate at which its industry is growing.

Last year, China committed to producing 105 gigawatts of solar energy by 2020 as part of its five-year economic plan. The goal was ambitious, and to achieve that goal, China needed to triple its solar energy production annually through 2020.

Incredibly, China hit that goal by reaching 112 gigawatts this year, four years ahead of schedule. China's solar energy growth has been so explosive that the country has doubled the new energy capacity of any other country in just the past year.

Solar Energy Will Power the Farms of the Future

These gains are all part of a well-thought-out and systematic plan on the part of the Chinese government to expand the country's solar industry. In 2017, China built the world's largest solar farm. China has also completed the world's largest floating solar farm this year. Together, these two operations can generate enough power to sustain 215,000 homes.

While these two solar farms are massive, they are nothing compared to China’s potential growth.

You see, China is the world's biggest consumer of electricity, at 4.8 trillion kWh annually. The United States consumes just 3.9 trillion kWh of power.

You see, China's current solar output is just 5% of the country's total energy output, which means it still has tremendous potential. Today, solar makes up 5% of China’s energy production, while coal makes up 59% of the total. Five years ago, solar was less than 1%, and coal was 66% of the total.

That means if solar energy is able to replace even half the energy supplied by coal, China’s solar energy will skyrocket.

In fact, Wood Mackenzie predicts China's solar generation is poised to grow an astonishing 700% by 2035.

And American investors can profit from these explosive numbers by owning the top solar stocks in 2018.

Here’s the best one to buy…