The price of Bitcoin recovered Friday after regulators approved a plan by the Chicago Mercantile Exchange (CME) to launch Bitcoin futures on Dec. 18, 2017.

In addition, Cantor Exchange, a subsidiary of Cantor Fitzgerald, has also been approved for Bitcoin binary options. 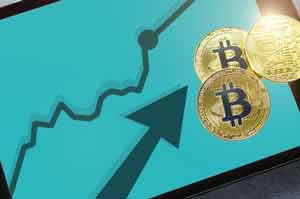 Despite the approval, the U.S. Commodity Futures Trading Commission (CFTC) did raise concerns about volatility in the cryptocurrency sector while announcing the decision.

The warning came the same day that a prominent investment strategist took a rather secure stance on Bitcoin. Allianz economic advisor Mohamed El-Erian said that investors need to separate the primary issues between Bitcoin's underlying technology and the cryptocurrency itself.

El-Erain - though arguing that Bitcoin isn't a fraud - raised concerns about its ability to establish itself as a currency. "I don't think it's a fraud. The question is, do you believe it will become a currency?" El-Erian told CNBC.

The worst performers from the top 50 largest cryptocurrencies by market capitalization included Tether (down -0.60%) and Raiden Networks (down -0.14%).

The Bitcoin market capitalization rallied to nearly $180 billion. The price has recovered after a sharp decline that sent prices below $9,000.

We've witnessed a lot of wild changes to the market over the last 24 hours, and a lot of analysts and prominent figures are sharing their insights.

Among them, Nobel Prize-winner Joseph Stiglitz called for a ban on Bitcoin, while Wall Street analyst Tom Lee predicted that it could hit a value of $100,000.

Finally, hedge fund billionaire Carl Icahn has joined the bandwagon and said that Bitcoin is clearly part of a "speculative bubble."

Litecoin Rebounds After Slide to $78

Litecoin prices stabilized after a sharp downturn in yesterday's session. The price ticked back above $90.00 as traders poured back into the Bitcoin rival.

There has been no shortage of negative sentiment from central bankers over the future of Bitcoin.

After all, central banks around the globe are ground zero for disruption of the global financial markets. They are doing everything they can to maintain tight control over monetary policy and influence.

Today, the Bank of France has warned investors that they can invest in Bitcoin, but they must do so at "[their] own risk."

Francois Villeroy de Galhau, governor of the Bank of France, called Bitcoin a "speculative" asset. "Its value and extreme volatility have no economic basis, and they are nobody's responsibility," he said.