Few investments have the profit potential of penny stocks - defined as stocks that trade under $5 per share. Just take a look at Marathon Patent Group Inc. (Nasdaq: MARA), which climbed an astounding 341% during the four trading days of Thanksgiving week.

So today, we're giving you five of the top penny stocks to buy for December 2017, which all have massive upside.

While these stocks have huge profit potentials, you must keep in mind that penny stocks are speculative investments that often see big pullbacks after making large gains.

That's why Money Morning Chief Investment Strategist Keith Fitz-Gerald recommends that no more than 2% of your stock portfolio consist of such risky investments. And these are only investments for those willing to accept some risk.

But if you're willing to take the risk, one of these stocks could bring you profits of over 500% next year.

Now here's the first penny stock on our list today...

Currently trading at $4.10 per share, T2 Biosystems Inc. (Nasdaq: TTOO) makes diagnostic products for biological in vitro research. It has the highest share price of the penny stocks on our list today. 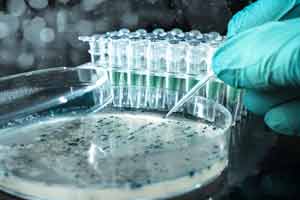 In vitro is Latin for "in glass". This type of research is traditionally done on a component of an organism, in test tubes and Petri dishes, outside of the component's normal biological surroundings.

T2's diagnostic products are used specifically for the detection of pathogens and abnormalities - especially Lyme disease - in human body fluids.

The company's stock is covered by four firms, and its Q3 2017 results beat analysts' earnings expectations.

According to S&P Capital IQ, shares of TTOO have an average price target of $5.75, representing 40.24% upside from current levels.

According to climatecentral.org, the amount of power generated by one two-megawatt wind turbine could power 380 homes during a year.

This is actually a fairly conservative estimate, based on the assumption that a two-megawatt wind turbine only produces a quarter of its maximum power. This is due to the intermittent nature of wind energy-meaning the wind doesn't constantly blow.

Its stock currently trades at $3.24 and is covered by four firms, with an average price target of $7.38, representing 127.77% upside from current levels.

AMSC has beaten analysts' earnings expectations in eight of the last nine quarters, according to S&P Capital IQ.

In July 2017, Cogentix announced it had entered into an exclusive licensing agreement with medical device maker Promepla, to launch an endo-urology product line in the United States.

In the company's Q3 2017 earnings call on Nov. 7, CEO Darin Hammers said the rollout of the new product line should allow for 20% revenue growth in the company's urology segment next year. This segment represents about 29% of the company's net revenue.

CGNT shares are covered by three firms and have an average price target of $4.58, with one JP Morgan analyst targeting $5. From the stock's current level at $3.07, those price targets represent 49.19% and 62.87% upside, respectively.

The company has matched or beaten analysts' earnings expectations in the last two quarters.

Now, as promised, here are the final two stocks on this list. Both trade for less than $1, and one has upside of more than 500%...

penny stock are good to start? I do not have to much money. I am a retire and
each penny counts

Thanks to Money Morning, I am pretty much willing to start investing in Pot Penny Stocks.Since I am a novice , could you tell me , please , how to make it happen. I am very interested in CBIS shares.

Need to make some money.

What pot stocks do you recommend? There are so very many.

Thank you for your response to the above comments

I keep running into needing a $25,000 account value in order to purchase some penny stocks. Hopefully if I decide on any of these I can complete transaction.

Need your plans to invest, do you have an advisor or someone to help me invest? Thank you

I started my brokerage account with TD Ameritrade with $1000 now they’re brokerage fee if you do all the work online is only like 6.99 per trade. If you’re only buying stocks you don’t need very much to start but if you want to trade options you’ll need more money or they won’t approve you and tell you have more money in their account

The OPGN stock you recommended. It did not go up yet. Its been about a month. Could you explain?

I am new to this, how and where can I get start it investing in the Pot Penny Stocks.
Thank you,