Gold prices haven't been making headlines to compete with record-high stocks or Bitcoin reaching $10,000. But that's all about to change...

The price of gold has appeared stagnant since October.

Normally, traders flock to the precious metal during times of uncertainty and instability. That's why it was surprising that not even another ballistic missile fired by North Korea was enough to rally gold prices. 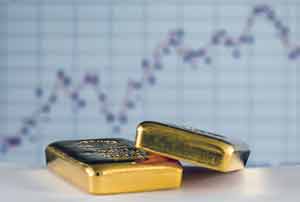 The precious metal continues to trade in a narrow trading range about $25 wide.

But the gold price has been stealthily making a distinct series of higher lows ever since its most recent bottom in late October.

And the upcoming December FOMC meeting could be the catalyst gold needs to boost it even higher by the end of the year...

How Gold Prices Have Been Sneakily Rising

Before we get into gold's next major catalyst and our gold price forecast, here's how gold has performed over the last week...

Gold looked strong enough to start out the week, as the U.S. Dollar Index (DXY) - a measure of the dollar's value against other currencies - continued to weaken.

Here's a glance at the DXY this past week. 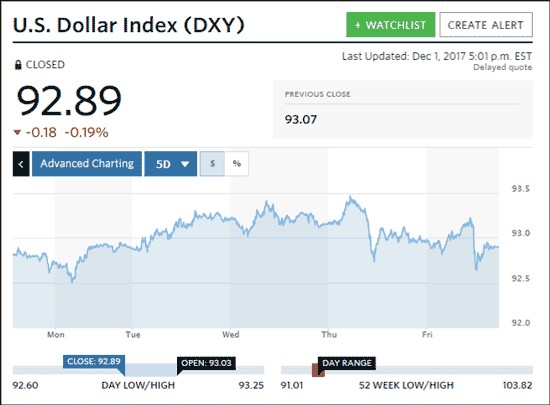 Then on Friday, the DXY managed to climb a little higher still. Gold initially held its own before breaking out after breaking news in Washington, D.C. That was a report that former Trump national security advisor Michael Flynn would plead guilty about lying to the FBI and cooperate with special counsel Robert Mueller's investigation into Russian interference in the 2016 U.S. election. Gold immediately tacked on a $19 premium, from $1,271 around 10:30 a.m. to peak at $1,290 by 11:30 a.m. The DXY retreated to 92.9, helping gold to hold the $1,280 level through to 5 p.m.

Even though gold prices have been trading within a narrow range, they've slowly been rising. That's why my gold price prediction is especially bullish on the metal after the next Federal Reserve meeting...

Where Gold Prices Will Go After the December Fed Meeting

How do you buy gold?

Our "Essential Guide to Buying Gold & Silver" can help you find a starting point. You access it by clicking here.

Thank you for reading Money Morning!

No mention at all about the deep state manipulation of the market!