Russia has been using the North Korean nuclear crisis to its benefit.

That's when the world learned North Korea had managed to advance its weapons development enough to build a missile capable of targeting any city the mainland United States - in spite of the United Nation's Sept. 11 sanctions. Even China's punitive financial measures have apparently failed to curb North Korea's shows of violence.

And in the days following the missile test, two Moscow diplomats have issued statements revealing Russia's next self-serving plays in the North Korea nuke crisis. 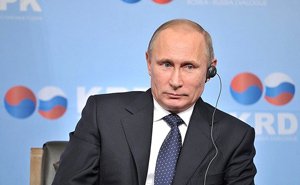 Here's a look at what those diplomats have said, what their statements revealed about the future, and where we think Moscow will go from here with its self-serving North Korea tactics.

Plus, we've got a profit play for investors looking to cash in on Russia's antagonistic relationship with the United States.

Last Wednesday, Valentina Matviyenko, speaker of Russia's upper house, announced that she would be visiting North Korea in 2018.

While Matviyenko did not expand on why she intended to take the trip, she didn't really need to; the intent of her announcement wasn't to inform, but to deride...

It was a jab at China - particularly, over an envoy recently dispatched from Beijing to Pyongyang that ultimately failed to curb the regime's nuclear ambitions and weapons advancements.

Matviyenko's disclosure exposed one part of Russia's endgame with North Korea: to emerge from the crisis as the sole nation capable of brokering a deal with dictator Kim Jong Un.

Brokering a peace with North Korea would also improve U.S.-Russia relations. Russia's relationship with America is rather strained these days, after all - having deteriorated over allegations that Russia meddled in the 2016 U.S. presidential election.

However, bringing Kim Jong Un to the negotiating table could turn the diplomatic sourness around.

For its part, North Korea might just agree to diplomatic talks with Russia at its side, suggested the Nikkei Asian Review this morning. Should Kim Jong Un sit down and talk, he'd likely only do so with one of his regime's largest allies present.

And Moscow - not Beijing - is quickly becoming that ally to Pyongyang...

For instance, trade between Russia and North Korea increased by a staggering 73%, to $31.4 million, during the first two months of 2017 compared to the same period last year, reported USA Today on June 5.

The rest of the world, meanwhile, was cutting off ties with the regime.

And that early-2017 trade figure between Pyongyang and Moscow could be a vast understatement, since Russia's oil deliveries to North Korea don't appear on official customs data, CNBC reported on Nov. 23. The news outlet estimated that "actual trade volumes [between the two countries] are at least three times higher than what is recorded."

And just last week, Russia came to North Korea's side once again...

"We have never sought war with North Korea, and still today we do not seek it," Haley had said, according to Newsweek on Dec. 1. "If war does come, it will be because of continued acts of aggression like we witnessed yesterday. And if war comes, make no mistake, the North Korean regime will be utterly destroyed."

Haley went on to admonish Kim Jong Un for bringing the world "closer to war" with his country's recent missile test.

Lavrov shot back at the U.S. ambassador to warn that any military action on America's part would be a "big mistake."

Editor's Note: Don't miss a single update on North Korea's weapons advancements - or what the U.S. defense industry is doing to halt its progress. Get real-time alerts sent to your inbox, completely free, here.

"If someone really wants to use force to, as the U.S. representative to the United Nations put it, 'destroy North Korea,'" Lavrov warned, "then I think that is playing with fire."

Meanwhile, China has failed to come to North Korea's defense in any meaningful way after the missile launch.

And, according to Lavrov, because the United States appears to be "provoking" Pyongyang, Russia will continue trading and maintaining relations with North Korea.

That very statement proves, once again, that Russia is positioning itself to be the last broker-dealer standing ostensibly capable of halting the North Korean nuke crisis.

Mad at Russia's Antics? Then Invest in Moscow

"Negative headlines about Russia are on the covers of several major magazines, including The Economist," Keith says. "That's a dead giveaway that it's time to make your move, as far as I am concerned."

His reasoning: "The fact that most global traders and the mainstream media are almost universally against Russia right now is a glaring signal that emotions are running high. Given that we know they are almost always wrong, the logical move is to take the other side of the trade."

That "other side" exists in the company Qiwi Plc. (Nasdaq: QIWI).

Qiwi provides Russia, Kazakhstan, Moldova, Belarus, the United Arab Emirates, and the United States with many of the financial services that the Western world takes for granted, like bill payments and simple financial transactions.

"It's developed a loyal following in a notoriously complicated part of the world," Keith explained, "where consumers are way behind their Western counterparts and, more importantly, acutely aware of what they are missing out on."

What's extremely encouraging about Qiwi's potential is that the financial payment service provider is achieving new levels of growth despite Russia's capital flight more than doubling in recent years. It's carried out partnership deals with some of Moscow's largest Internet companies, including MegaFon, a leading Russian telecommunications operator

"When the news in Russia goes from terrible to less bad - and foreign capital starts to return even as domestic spending increases," Keith wrote, "QIWI will be able to ride a surge in demand, and yield incredible profits for investors who buy the stock at its discounted price today."

Which means now is the time to buy.

Physicists have known about an unlimited source of free fuel for over 100 years.

And now, thanks to a stunning breakthrough in chemical engineering, we have the ability to power the entire planet for over 36,000 years. And the cost of this fuel is zero.