Congress has been paying sexual harassment victims to stay silent with your tax dollars. 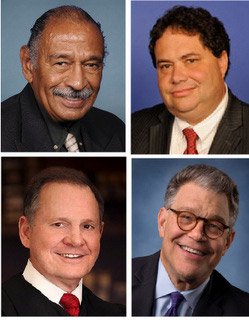 As if the recent wave of revelations of sexual harassment by congressmen wasn't appalling enough, we're now finding out that Congress has used taxpayer money to settle sexual harassment cases out of the public eye.

It's not just the wasteful government spending that's so offensive, but that it was used to cover up bad behavior.

Just how much "hush money" Congress has spent is unclear, as the pot from which most of it comes from is part of the U.S. Office of Compliance (OOC). The OOC was created in 1995 by the Congressional Accountability Act to deal with workplace issues in all the offices of the legislative branch, ranging from allegations of discrimination to unsafe conditions in the workplace.

So far, three settlements have come to light...

Your Tax Dollars Paid for These Sexual Harassment Settlements

The 88-year-old Conyers, who announced his retirement today (Tuesday) as a result of multiple sexual harassment allegations, settled a wrongful dismissal case in 2015 for $27,000. The money for that came from Conyers' congressional office budget and was labeled as severance pay to mask its true purpose.

A 2014 accusation from a female staffer against Farenthold resulted in an $84,000 settlement paid out of OOC funds, according to Politico. Yesterday, Farenthold promised to repay the taxpayer money.

And in 2010, the OOC paid a $100,000 settlement to two male staffers who worked for Rep. Eric Massa (D-NY), ABC News reported. Massa resigned that same year ahead of a pending ethics investigation into the sexual harassment claims.

While the actual sums are small in comparison to the $4.1 trillion federal budget, it's outrageous that any taxpayer money was spent on these settlements.

"It is unconscionable that Congressmen and Senators have taxpayers foot the bill for their disgusting actions," said Rep. Tom Marino (R-PA) as he introduced a bill to Congress, on Nov. 28, which would forbid the use of taxpayer funds to pay sexual harassment settlements.

Because of the secretive way in which these cases have been handled, we can only guess at how many more times since 1995 your tax dollars have paid sexual harassment settlements to protect a Congressman's reputation...

We've Only Scratched the Surface of This Issue

According to The Washington Post, the OOC has paid $17.2 million in taxpayer money for 264 settlements and awards since 1997. Because of confidentiality rules, we don't know how many of these were related to sexual harassment complaints. 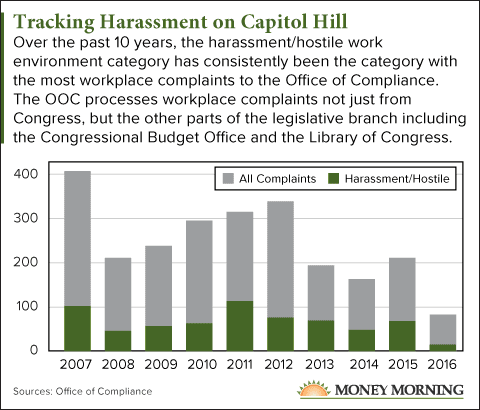 But the OOC publishes an annual report that breaks down the different types of complaints by category.

The data shows that "harassment/hostile work environment" is consistently the category with the most complaints.

As watchdogs dig for answers, don't be surprised if the tally of your tax dollars spent on sexual harassment settlements rises and more congressmen get added to the list above.

And in addition to being a deplorable way to spend taxpayer money, the murky nature of the settlement process helps cover up these political scandals.

Editor's Note: Events in Washington affect your pocketbook, whether it's a shift in economic policy or an overhaul of the tax code. We guide you through these changes and explain how to make them work to your advantage. Get real-time alerts sent to your inbox, completely free, here.

"This is exactly why there should be transparency," Rep. Kathleen Rice (D-NY) told ABC News. Rice is a co-sponsor of a bill that would end the secrecy surrounding the settlements. "There is no reason why these settlements, these accusations should be done in secret once they're adjudicated."

Here are the changes you can expect...

What Congress Will Do Now

Moore hasn't been elected yet none of the senate slush fund has been used for his allegations. Your story lacks integrity and creditably.