Gold prices hit a four-month low yesterday (Tuesday) after languishing near $1,275 since the start of October. Despite the pullback, there are three major gold catalysts everyone is overlooking.

Krauth believes gold prices could rise another 6.7%, to $1,350, before the year is out. But that's nothing compared to his new gold price target for 2020. 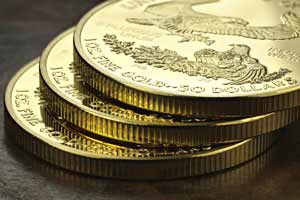 Normally, traders migrate to the precious metal during times of uncertainty and political turmoil. Events like North Korea's recent missile testing and the continuing controversies in Washington would normally have served as catalysts for gold prices.

But as the stock market continues setting record highs in 2017, gold is being ignored. And that's a huge mistake.

Investors are missing three major catalysts that will lead to gold's bull market through 2020.

URGENT: A completely unique gold play is forming in the markets. And it's so rare that it's only the third time in 20 years that it's happened. If you get in now, you could see a share of upwards of $13 billion in cash windfalls. Read more.

Here are the three reasons why we're raising our gold price forecast - and the shocking new price target we've set for 2020...

According to Krauth, inflation will be a huge boon for gold prices through 2020.

The current 1.6% inflation rate is the second-highest level in the past five years. That number is forecast to move even higher as the stock market keeps hitting record highs, according to Krauth.

Inflation is the rate at which prices of general goods and services increase and the purchasing power of the dollar decreases.

But there's been a growing sense of uncertainty among investors as the stock market keeps hitting record highs. Rising inflation often convinces people the economy is growing unstable, which can cause investors to exit the stock market.

And that's only the first gold price catalyst...

Over the last year, the number of short positions on gold stocks has fallen. One of these stocks is a Canadian gold mining company called NovaGold Resources Inc. (NYSE: NG). In the last 12 months, the volume of short bets on the stock declined 79%, to 522,400. This shows a shift in sentiment from bearish to bullish for gold.

A broader indicator of short interest is the Gold BUGS Short Index (NYSE: HUISH). This index tracks short selling on mining firms that specifically refuse to cut gold production based on gold price movements. In the last 12 months, HUISH has dropped 6.24%, indicating short interest in the broad gold sector is falling.

But wait till you see this shocking trend...

Since 1986, U.S. Fed interest rate increases have been followed by strong gold gains.

Before the rate increases, you'll see gold prices skid. But then, after the actual rate increase, they'll rally. This is supported by 30 years of data. 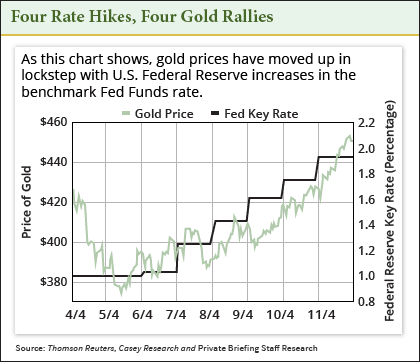 And this trend appears to be happening again right now. The Fed's September meeting showed an interest rate hike wouldn't be likely until December. And gold prices peaked this year at $1,348.80 on Sept. 8, before falling to $1,275, where they've been at ever since.

If gold prices behave like they have for the past 30 years, then they should rally following a December rate hike and continue rallying in step with further rate increases.

Now that we've run through the three catalysts for gold prices, here's exactly where we see them heading by 2020...

Our Gold Price Forecast and Price Target for 2020

With your thinking that gold will rise to over $5K/opz by 2020, can you advise a few reasonably priced (if there is such a thing) gold mutual funds, or ETFs that
I can put some money into? I just recently subscribed to Nova-X.

Bullish and bullish, however, the criminals who have nothing to do with bearish thinking, bring the market down with their bloody computers. Whether they are called JP Morgan, Goldman Sachs or whoever they make their stinking money on the backs of normal hardworking people who are losing their savings by those criminals

I bought gold to hold vs. GLD which is just paper

I'm bullish on gold. Here's why:
1 It will just take one giant political problem to send gold up. Possibilities are war, terrorism, plague, natural disaster, etc. With you-know-who in office system shocks are guaranteed.
2. The fed will keep supporting the market – causing more inflation
3. Gold is pushing through ceilings. 1475 was a ceiling. When it goes higher than 1575 thats another one.
I'm betting big. My stock is NUGT which moves three times – up or down. Its a gold miner stock that tracks gold a little bit. Its a three times stock. If a regular gold miner stock rises one dollar, NUGT rises three – and unfortunately vice versa. This ETF ain't for risk on players. I bought it 4 months ago and lost 20 percent. I'm prepared to wait another 6 months. That's because when it hits – and I think it will, I make big time money. GO NUGT!