Top S&P economists issued a report on the U.S. government yesterday that may as well have been stamped with a hazmat warning.

The S&P's Chief Economist, Beth Ann Bovino, warned Americans not to bet their holiday budget on a "rational U.S. government," because it "may be a risky proposition that leaves the cupboards bare to start 2018," reported The Telegraph today. 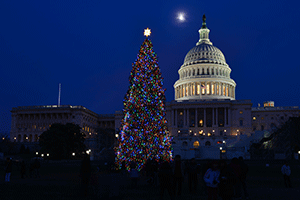 Specifically, her team's report outlined the economic effects of congressional legislators' failure to address the impending debt ceiling. The report shows how fiscally devastating it would be for them to continue setting it aside... especially amid government shutdown threats to boot.

You see, Congress is currently in the midst of a national financial battle with two fronts.

"Front one" pertains to funding Uncle Sam in 2018. Policymakers passed a short-term measure to keep the government afloat through Dec. 8 (tomorrow). They're expected to pass a short-term patch keeping the government running another two weeks. If terms aren't set by the new deadline, the U.S. government could shut down.

"Front two" pertains to the U.S. debt ceiling, or how much debt the United States can take on. The debt limit does not control spending; rather, it allows the government to borrow in order to satisfy the legal obligations set forth in the yearly budget. Its deadline is Dec. 15.

Bovino's report states that legislators have completely lost focus on both the debt ceiling and government funding in order to focus on the new tax bill.

Here's a closer look at what Bovino had to say - and how investors can prepare for a severe market correction should Congress continue kicking the can down the curb...

How a Government Shutdown Will Change the Economy

The economic growth we've enjoyed lately is in danger.

Bovino suggests that a U.S. government shutdown - resulting from policymakers' failure to agree on 2018 federal spending measures - would burn a hole straight through the strong economic growth of recent months.

The damage, Bovino explained, would incur because of the shutdown's timing: "In particular, if a shutdown were to take place so far into the quarter, fourth-quarter GDP would not have time to bounce back, which could shake investors and consumers and, as a result, possibly snuff out any economic momentum."

She based her prediction on the private and public sector impact brought about by previous federal shutdowns in 1995-96 and in 2013.

But what makes 2017's particular predicament so ominous is the fact that a government shutdown and the U.S. debt ceiling crunch loom large right now.

In fact, Bovino warned that the cumulative effects from prolonged indecision about both matters could cost the U.S. economy about $6.5 billion per week, or about 0.2% of GDP growth in the fourth quarter of 2017, The Washington Post reported today.

"Not the way you want to ring in the holiday season and the New Year," she added.

But there are steps investors can make right now to protect themselves from the impending financial chaos...

Here's Your Profit Play When Congress Provokes a Market Pullback

"Simply going out and grabbing any old stock on a dip in hopes that the grinding bull will sweep back in and push it higher doesn't make good long-term sense," he explained.

Rather, investors should buy "good, quality companies - companies where the fundamental business case for owning them is unaffected by what the stock market happens to be doing. Lockheed Martin Corp. (NYSE: LMT), for instance, is one of my very favorites."

The company has gained a whopping 250% over the past five years.

"It makes sense to be prudent in trading these pullbacks, too," D.R. continued. "In my 10-Minute Millionaire Pro service, we're adjusting the size of the pullbacks we'll play, flexibly changing our posture to make bearish trades when the pullbacks get steeper than what we're seeing now."

His service teaches investors how to "just keep turning the crank" in order to see a steady stream of income pour in.

The best part is, once investors set the system up, practice it, and allow it to run, they'll be able to maintain it in 10-minute increments.

Here's how the strategy works...