The Bitcoin price is trying to recover after a wild morning that ended with the crash of Coinbase, a digital asset broker that allows customers to buy Bitcoin, Litecoin, and Ethereum.

That's why crypto investors are asking, "What is happening with Coinbase today?" 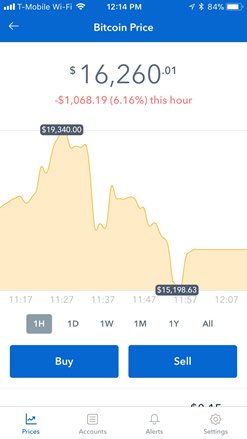 The image above offers a visual of how quickly and sharply the decline happened.

The downturn led to a 25-minute shutdown on Coinbase, which released a series of tweets that said it was experiencing "record high traffic."

As a result, many customers reported slow performance and the inability to buy or sell Bitcoin.

This is the second major outage for Coinbase in a week. Last week, Coinbase went offline and delayed trading for Bitcoin, Litecoin, and Ethereum. The company took hours to conduct maintenance, but not before Bitcoin prices fell by more than $2,000 per coin.

Naturally, users have been very angry about the outages and the fact that some have missed huge profit opportunities.

Since January, the number of users on Coinbase's platform has more than doubled. To start the year, Coinbase had 5.5 million users, a number that swelled to 13.3 million by Nov. 30.

Coinbase is still one of the easiest platforms for new crypto investors to buy and sell Bitcoin, Ethereum, and Litecoin, but these crashes show the site still is far from perfect.

Me too! Some reliable advise please! Tu much confusion!

I want to know more about cryptos
thanks

Bit worrying about Coinbase
I have an account with them