The mainstream media is comparing Bitcoin to the "Tulip Mania" of the 17th century, a famous speculative bubble of tulip prices. But Bitcoin is not in a price bubble...

During Tulip Mania, tulips would soar to such astronomical value that 10 tulip bulbs could buy a mansion. Prices eventually collapsed in 1637, making the flower worthless and creating a lesson for all speculative investors. That's what the media wants you to believe, at least. 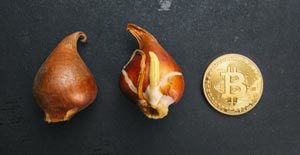 "You can't compare it to the tulip bubble because there's actually real value in Bitcoin," Lee said on the program.

Why Bitcoin Is Not a Modern Tulip Mania

There's a clear distinction between the two: Flower bulbs have limited value, and Bitcoin is changing the global economy.

During the Dutch Golden Age of the 1600s, the Netherlands was the richest country in Europe, according to Focus-Economics.com.

With the country's wealth growing, tulips became the "must-own item of the day to show off one's 'fortune.'" While the flowers may look aesthetically pleasing, that's the limit of their value.

In comparison, Bitcoin is only eight years old, but it has the power to create long-lasting change for our society.

For example, in January, the United Nations World Food Program sent cryptocurrency vouchers to Syrian refugees - instead of cash - so they buy food.

Programs like this allow for donations to directly reach the people they're supposed to help, as well as help organizations keep track of who has received aid and who still needs it.

That's why Bitcoin's price isn't the next Tulip Mania. Far from it.

And it's Bitcoin's ability to completely disrupt entire industries that could send the cryptocurrency to $500,000 per coin by 2030...

How Bitcoin Will Transform the Payment Industry