As Bitcoin rockets to new highs almost daily, it begs the question, "Can Ethereum reach $1,000?" 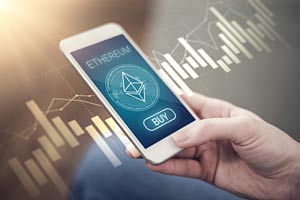 And yet, monster gains like that tend to leave investors wondering if there's any gas left in the tank.

But if 2017 has taught us anything, it's that you can never assume a cryptocurrency has peaked.

Both Bitcoin and Ethereum have far exceeded price predictions made at the start of the year, as have dozens of other cryptocurrencies.

While many analysts have been forced to keep revising their Bitcoin and Ethereum price forecasts this year, one charting tool used by technical analysts has proven extremely useful at estimating cryptocurrency price movements.

And it's telling us that an Ethereum price of $1,000 is definitely on the horizon...

I'm talking about Fibonacci charts. J.C. Parets, founder and president of All Star Charts, has been making Fibonacci charts for Bitcoin since last year. And what he saw unfold through 2017 amazed him.

"Talk about Fibonacci - I mean, dude, does it get any cleaner than this?" Parets said during an Oct. 13 presentation at Stocktwits' annual Stocktoberfest West conference. "I mean, guys, this is like to the penny."

Here's what his most recent Ethereum Fibonacci chart looks like: 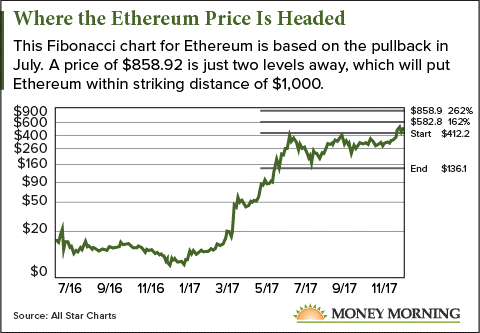 A Fibonocci chart typically starts with a major retracement. For Ethereum, Parets used the 67% drop from mid-June to mid-July. Fibonacci levels start with the price regaining the previous peak - in Ethereum's case, $412.21.

While Fibonacci charts don't predict when an investment will reach the next level, Ethereum's track record suggests we'll see it reach the second extension ($858.92) at minimum and very possibly the third.

After all, Bitcoin blew through five Fibonacci extensions in about seven months.

There are several reasons to believe Ethereum will have a lot of price momentum behind it in 2018.

These catalysts explain why the price of Ethereum will check off one Fibonacci extension after another...

What Will Drive the Ethereum Price Higher in 2018

Hi. How can I invest in Crypto currencies – Ethereum?

What is the current value of Ethereum Classic (ETC) now as opposed to ETH?? Answer appreciated. Thanks.

What is the price of ETC currently compared to ETH??

Thanks for reading Money Morning. Ethereum Classic (ETC) trades at a much lower price than EThereum (ETH). As I write this on the morning of Dec. 18, ETC is trading at about $39 while ETH is $722, according to CoinMarketCap.com.