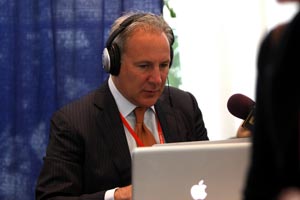 Investors are "drunk on the Kool-Aid that is Bitcoin," says veteran market forecaster Peter Schiff.

"No matter how high it goes, they're never going to sell," Schiff told TheStreet on Dec. 10.

And this week, Bitcoin prices are surging again as futures trading begins.

But according to Schiff, the rally won't last.

"Ultimately, I think Bitcoin has really no value," said Schiff. "In the market, it has plenty of value. As long as there's buying, there's value. But when the buying goes away, so does the value."

Schiff has an ulterior motive behind his prediction.

Not only is Schiff a notorious permabear who has been calling for a stock market pullback since 2014, but he's also a longtime gold bug.

So it would make sense that he doesn't want Bitcoin to succeed. After all, many are worried that as more and more people pile in droves into Bitcoin, less people will be interested in investing in the heavy metal.

According to a New York Times report, big Wall Street investors are also "pouring their money" into the virtual coin, with the number of hedge funds focusing on cryptocurrencies increasing this year from 30 to almost 130.

Some Bitcoin enthusiasts are even calling the cryptocurrency "Gold 2.0"

"We've always felt that Bitcoin, given its properties, is gold 2.0," said Cameron Winklevoss, who owns over $1 billion worth of Bitcoin, to CNBC on Friday. "Gold is scarce, Bitcoin is actually fixed. Bitcoin is way more portable and way more divisible [than gold]."

Winklevoss even went as far as to compare Bitcoin's market cap, around $300 billion yesterday, with gold's, at $6 trillion. "If Bitcoin disrupting gold is true... then you can see 10 to 20 times appreciation because there is significant delta still."

For the record, we think Winklevoss is wrong about gold. In fact, we think the recent flare up of public interest in Bitcoin could be setting gold up for a huge rally down the road. And in the long run, we see both as excellent moneymaking vehicles.

But we agree the Bitcoin price is far from its peak.

But not everyone has the capital - or the risk tolerance - to hop on the Bitcoin train right now.

For those looking for similar breathtaking returns without the risk, Money Morning Quantitative Specialist Chris Johnson has identified a way to get stellar returns without investing in speculative, turbulent currencies.

Chris is a quant - like the "rocket scientists" of investing - with a specialty in applying advanced mathematics, like stochastic calculus, linear algebra, differential equations, and statistics, to Wall Street's data-rich environment.

Chris Johnson used to be a hot shot CEO who wore $8,000 suits, bought yachts for the heck of it, and flew private jets to Manhattan to collect $50,000 checks.

But now, every evening after the closing bell rings at 4 p.m....

He infiltrates the markets, executing a brand-new type of trade that can make him 50%, 75%, or 125% by the time he checks his account the very next day.

NO ONE - not even the best traders and analysts in the world - can make this kind of insane money - and on ordinary stocks, no less.

But Chris Johnson is unlike anyone you've ever met...

Click here to see how he does it - and learn how you could be making millions for yourself...

Looking forward to your newsletter

"Winklevoss even went as far as to compare Bitcoin's market cap, around $300 billion yesterday, with gold's, at $6 billion."

Think that's a typo, gold should be around 6-7 trillion, not billion. Otherwise this wouldn't even be a discussion.

Good eye! This error has been corrected. We appreciate your comment, and thank you for reading Money Morning!