Silver prices have continued to struggle, but the end may be nigh.

Am I crazy? Maybe.

After all, the broad markets keep setting new records. Bitcoin and its ilk have done the same, but exponentially.

Why would anyone want silver? After all, anything and everything else will keep rising, forever.  Right? 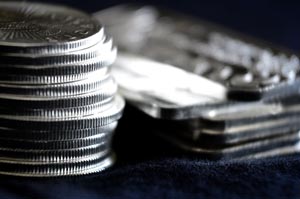 Remember, above all, precious metals are insurance. And right now, that insurance, especially relative to pretty much all other asset classes, is dirt cheap - which is when you should be buying it.

I've been telling you that silver may be bottoming and that silver stocks could be leading them higher. Now we have still more data pointing to exactly that kind of scenario playing out.

In investing, there's never a "sure thing." But based on the historical action in this sector, as well as its more recent performance, this is about as sure as it's likely to get for higher silver prices in 2018.

Before I reveal my newest silver price target, here's a look at how silver is trending right now...

Here's How Silver Prices Are Trending This Week

Silver's past week was a near-perfect continuation of the gradual sell-off of the previous five trading days.

Here's the DXY action for these past five trading days. 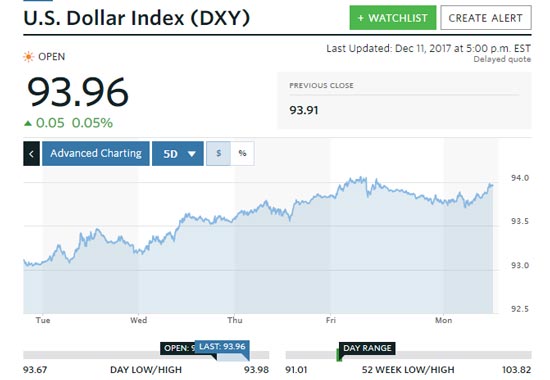 Friday's action would see a small bout of refreshing strength in silver prices, not surprisingly, as the DXY peaked early, then retreated. Silver's opening price was $15.80. The DXY at that point was squarely above 94. But as of 11:00 a.m., traders started selling the dollar, and its index would reach about 93.90 by 5:00 p.m. That helped silver regain a little strength to trade hands at $15.82 to end the day in New York.

But with the approaching FOMC meeting, which is expected to end with a rate hike, the dollar saw buyers come back in. That supported a small rally in the DXY to about 93.95. Naturally, silver didn't like this and opened at $15.76 on Monday, Dec. 11.  From there, it sold down to eventually close at $15.67.

While the pullback in silver prices is worrying to some, this is actually an excellent time to add to your silver positions. Here's how high I see silver prices heading in 2018...

Dear Peter, always enjoy your metal comments. I am AMAZED at the recent comments by members of Money Morning 'pushing' the bit coin. Why would
I want to invest in "nothing". Oh well

I sense hopeology in your analysis.

I will give it a try.

Dear Mr. Krauth – The precious metal markets should have been far higher already if there do not exist criminals such as JP Morgan with there so called """ secret office""" in Jupiter , Florida where so called """ experts"" are minipulating in a dirty way the markets. Goldman Sachs are also these types of kind guys.
ISIS are killing people in a physical way whereas these fantastic smart but dirty manipulators are killing people in a financial way, by taking away with their manipulations the savings of normal people. I found out that you donot react on my comments but from other sides I got as answers that I was completely correct and that it is taken care of to stop this kind of trading. Howeverm the big question is when. .No doubt guys with pockets full of money are walking around to stop the stopping