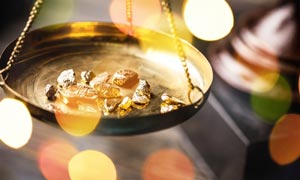 Some pundits will tell you that gold is dead, but the market has a different point of view. Let's cut right to the chase - gold is going higher in 2018, according to Money Morning Resource Specialist Peter Krauth.

And that will be a major catalyst for gold stocks in 2018...

Despite a few headwinds, gold is actually in a bullish trend. Since bottoming in 2015 at $1,045.40, it's now 19.1% higher. And that includes the recent weakness seen over the past few months.

Since its major bottom in 2001, Krauth sees the current path for gold prices as being very similar to that of the late 1970s. It was the dawn of what would become a great secular bull market, taking the metal to a 700% gain by the peak set in 1980.

As you can see, gold has the ability for huge long-term gains.

Right now, after a major correction and consolidation, gold sits on the cusp of yet another big run higher. And that's a major catalyst for the best gold stocks to buy for 2018...

Here's Why We're So Bullish on Gold Prices in 2018

Gold is a global commodity and is crucial for its ability to store value and its use in manufacturing. Therefore, we have to look at the metal from the view point of investors everywhere. That means looking at its price in terms of other currencies.

For example, gold priced in euros actually bottomed in late 2013 and is up 24% through today.

Gold priced in Australian dollars bottomed in 2014 and is also up 24% through today.

India is one of the largest buyers of gold on the planet for its huge gold jewelry market. Gold priced in Indian rupees bottomed in late 2015 and is up 14%.

Finally, gold priced in Japanese yen had a rather mild correction after peaking in 2013. However, for comparison, it's now up 11% from its 2015 low.

Gold stock price action is another reason to look for a rebound. The ratio of gold stock prices to the metal itself also ebbs and flows and often bottoms just ahead of major lows in the metal.

The stocks to metal ratio is still historically low, and a chart of the NYSE Arca Gold BUGS stock index for gold itself bottomed in late 2000, late 2008, and late 2015. Each time, gold bottomed within two or three months' time, leading to a multi-year advance.

That makes right now a good time for investors to pick up shares in gold stocks. Krauth thinks they are already undervalued.

And this is the pick that Money Morning experts are most bullish about...