Self-driving car stocks are the key to profiting from a market poised to grow a startling 33 times larger over the next dozen years.

A September report by PwC forecasts that revenue - from what it calls the "digital mobility services sector" - will grow from $65 billion today to $2.2 trillion by 2030.

For some perspective, that's five times as big as today's smartphone market.

The rush of money into this sector - which includes many areas well outside the traditional auto industry - will present tremendous profit opportunities for driverless car stocks.

And this revolution has already started.

The car you own now probably has some automated driving technology in it, such as corrective steering if you drift out of your lane and automatic emergency braking. Plug-in electric cars represent another piece of the driverless car future.

But that's just a taste of this sector's potential.

Free Profit Alerts:  Learn all the best ways to profit from this rapidly growing sector. To get real-time alerts sent to your email inbox - totally free - sign up here.

Take a look at the explosion in the money being invested in the self-driving car sector over the past 18 months...

A study by the Brookings Institution in October found that cumulative global investment in driverless car technologies by automakers, auto suppliers, and tech companies has increased eightfold, to $80 billion, since October of last year.

Innovation is happening in every corner of the self-driving car ecosystem, the study said. "OEMs making car parts and advanced sensors and other guidance systems, microchip manufacturers and software companies creating the computers that process information from these sensors, and finally the automakers and fleet operators that ultimately will be the ones to put autonomous vehicles on the road." 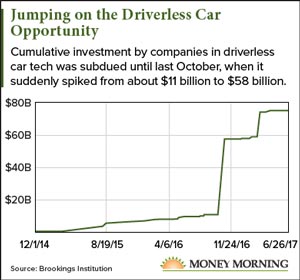 This is clearly the start of the broad profit opportunity PwC was talking about. The payoff for the technologies these companies are developing now will show up in their stock prices over the next couple of years.

And Brookings expects the pace of investment in self-driving car technologies "to continue as competitors continue the race toward deployment."

The opportunity is beyond question. But because it is spread over so many areas, investors have a wide range of self-driving car stocks from which to choose.

Here's an overview of the leading candidates in each category...

With the secrets you'll find in this book, we've produced 89 chances to double, triple, and even quadruple your money in the past two and a half years - 42 chances this year alone!

I haven't heard anyone say why we NEED self driving cars….??

It's great that we may have this technology, just don't see the need for it…???