The price of Bitcoin surged past $17,000 yesterday (Dec. 13, 2017) and helped push the global cryptocurrency industry back toward a $500 billion market capitalization.

The incredible crypto "gold rush" has made millionaires, and in the case of the Winklevoss twins, billionaires. 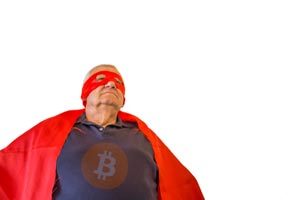 But as popular as Bitcoin has become, little is known about Satoshi Nakamoto, its mysterious creator.

This person's (or persons') vision introduced their version of a peer-to-peer cash system to the world just eight years ago.

In 2017, everyone is still asking, "Who is Satoshi Nakamoto?"

What We Know About the Mysterious Satoshi Nakamoto

On Oct. 31, 2008, a white paper outlined a radical proposal for the future of global finance.

The paper argued that Internet commerce overly relied on third-party institutions to process financial transactions. Not only do these third parties need to be "trusted," but they also had to spend time resolving disputes, addressing fraud, and engaging in other key practices.

These responsibilities raised the cost of transactions, and Nakamoto thought he had a better solution.

The paper proposed "a purely peer-to-peer version of electronic cash would allow online payments to be sent directly from one party to another without going through a financial institution."

This technology would aim to reduce costs, eliminate the reversal of transactions, and protect users from fraud.

Nakamoto rose to international fame not only through his work in the Bitcoin community up to 2010, but also for his disappearance after Bitcoin was launched.

He reportedly told a developer that he had "moved on to other things."

Early statements by the author, who claimed to be 37 years old and from Japan, have been called into question. Many wonder how the Japanese author had perfect English fluency and never translated or labeled Bitcoin's software into the Japanese language.

Many speculate that Nakamoto is either a pen name or the collaborative work of multiple people.

While we may never know for sure who the mysterious creator of Bitcoin really is, that hasn't stopped journalists, cryptocurrency experts, and economists from investigating and drawing their conclusions.

Let's look at the four most compelling candidates who could be the real Nakamoto...

Only one high-profile person claimed to be Nakamoto.

In May 2016, Australian entrepreneur Craig Steven Wright created an international buzz after he claimed to be the man behind Bitcoin in his blog posts.

Following his claim, authorities raided his home, although the reason turned out to be unrelated.

BBC journalists had said they saw him sign messages using the private keys linked to the original Bitcoin transactions.

But when further challenged to present proof of his claims, Wright deleted his post and said "goodbye" to the public spotlight.

"I'm sorry," he wrote in a 2016 blog post, suggesting that any evidence supporting his claims would lead to personal attacks.

In the end, many believe that Wright's claims were little more than a hoax designed to obtain publicity.

Leah McGrath Goodman, a journalist working for Newsweek, tracked down a man in 2014 living in California

His birth name was Satoshi Nakamoto, and he was a systems engineer with a background in financial information services.

He was going by the name Dorian Prentice Satoshi Nakamoto, and finding the "real" Nakamoto set off a firestorm of media interest.

Journalists would wait outside his home seeking comment. However, this man - Dorian Nakamoto - denied even knowing what Bitcoin was.

Finney was a cryptographic engineer and the very first person to use the Bitcoin software after Nakamoto.

Not only did he help report bugs, but he also helped improve the Bitcoin client and received the very first Bitcoin transaction in the world from Nakamoto.

Unfortunately, Finney passed away in 2014 after battling ALS for five years.

Finney denied being Nakamoto, and he showed evidence that he e-mailed Satoshi on multiple occasions.

"Today, Satoshi's true identity has become a mystery," he wrote in a forum post on Bitcointalk.org in 2013.

"But at the time, I thought I was dealing with a young man of Japanese ancestry who was very smart and sincere. I've had the good fortune to know many brilliant people over the course of my life, so I recognize the signs," Finney said.

The Internet has many theories that Szabo is Nakamoto.

Szabo, a computer scientist and cryptographer, designed the idea of "smart contracts," a key feature of cryptocurrencies.

Also, he is the original designer of a concept known as "bit gold." Though his project was never established, it has long been considered a "direct precursor to the Bitcoin architecture."

In 2008, before the Bitcoin white paper was released, Szabo had said in a blog post that he was intent on creating a version of the hypothetical currency he had been developing since 1998.

Media outlets have long speculated that Szabo is the man behind Bitcoin, but he furiously denies it.

However, financial author Dominic Frisby has gone on record stating that Szabo is the "one person in the whole world that has the sheer breadth but also the specificity of knowledge, and it is this chap."

Other Possible Candidates for Satoshi Nakamoto

Journalists have followed this story to the four corners of the globe over the years. Articles dating back to 2011 reveal a global hunt for Nakamoto, but every search has ended up fruitless. In 2011, New Yorker author Joshua Davis suggested that Dr. Vili Lehdonvirta and Irish student Michael Clear were potential "Nakomotos" in disguise.

In addition, there have been multiple stories on the web suggesting that the Central Intelligence Agency (CIA) and other government agencies are aware of Nakamoto's identity, but have elected to not make the information public.

The evidence, it is claimed, is based on textual analysis and a so-called digital fingerprint identified through writing samples.

We may never know who Nakamoto is, but we do know one thing: Nakamoto is worth billions of dollars...

Here's How Much Money Satoshi Nakamoto Is Worth