But we've got an unconventional investing tactic that could save retirees when the entire program collapses.

And it will collapse.

The numbers are irrefutable.

At present, Social Security's unfunded liability - what it expects to owe retirees but doesn't have the money for - is $34.2 trillion. 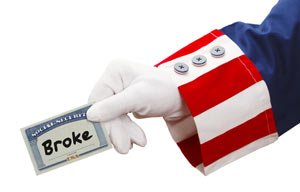 And the $2.8 trillion that is in the Social Security Trust Fund has already been loaned out to the federal government.

"Stated differently, the system's trust fund needs to be $37 trillion," wrote Laurence Kotlikoff, a much-lauded economics professor at Boston University, on July 22 in The Seattle Times.

That's the unfunded liability total plus what Uncle Sam owes back to the trust fund.

And despite knowing about this massive future fiscal predicament, members of Congress have done very little to counter it.

Check out these two plans politicians tried to introduce over the past year, then read about our one unorthodox investing tactic that could not only show you the money that Social Security owes (but will never pay), but much, much more than that...

Congress Threw These Social Security Plans at the Wall - Nothing Stuck

A few proposals to save the Social Security Trust Fund were introduced in both chambers of Congress over the past year. But because of the severe partisan divide surrounding benefits in regards to retirees' income, class, and age, among myriad other sticking points, not one piece of legislation has made progress.

For instance, U.S. Rep. Sam Johnson (R-TX) presented his "Social Security Reform Act" on Dec. 8, 2016. The bill would extend the longevity of the trust funds - without a tax increase. It would do so by increasing payments to low-income Americans while reducing them for high-income Americans. On top of that, Johnson's act would gradually increase the retirement age from 67 to 69 for those born in 1960 or later.

Johnson's bill made very little progress on Capitol Hill throughout the year. In fact, it was basically pushed to the side.

But during a debate over the Senate version of the soon-to-be-completed tax overhaul bill - the TCJA (Tax Cuts and Jobs Act) - legislators voted down an amendment to exempt Social Security, Medicare, and Medicaid from cuts if tax revenue falls short of current projections.

This means that not only can Congress not afford to raise taxes to keep Social Security solvent, a la Rep. Johnson's plan, but it needs to keep the door open to Social Security cuts in case its overhaul fails to spur growth in the U.S. economy.

Sen. Bernie Sanders (I-VT) introduced his "Social Security Expansion Act" on Feb. 16. It sought to increase benefits across the board and enact a COLA (cost-of-living adjustment) that more accurately measures the cost of healthcare expenses paid out by the nation's seniors and people with disabilities.

Sanders' bill, unsurprisingly, was rebutted almost instantaneously for its push to add more benefits for Social Security enrollees, which would add to the program's financial woes, digging it deeper into debt.

Sanders' solution to this problem was one of his 2016 presidential campaign's main talking points: raise the cap on taxable earnings.

Currently, earnings up to $127,500 are taxed for Social Security. This means that the wealthy pay a lower percentage of their income to the Social Security program. In 2018, the cap will go up to $128,700.

But Sanders wants to tax the wealthy far more than that.

Sanders' website proposes "lifting this cap so that everyone who makes over $250,000 a year pays the same percentage of their income into Social Security as the middle class and working families. This would not only extend the solvency of Social Security for the next 50 years, but also bring in enough revenue to expand benefits by an average of $65 a month; increase cost-of-living-adjustments; and lift more seniors out of poverty by increasing the minimum benefits paid to low-income seniors."

The Vermont Senator's bill didn't get any attention from his colleagues after its mid-February introduction.

The same could said of Social Security's imminent insolvency overall.

Congress has, time and again, hit snooze on the issue.

And the ones who will pay for its laziness: you, the average citizen.

But we've got a solution that doesn't require any approval from those who allegedly represent you in Washington.

You only have to "work" five minutes a night, so that you can spend the rest of your time doing whatever it is you enjoy doing.

The Night Trader is the one man who can make that a reality for you.

On Dec. 19, at 8 p.m. sharp, he'll be revealing his coveted night trading strategy for the first time.

Once you see how this man has been making money and the extraordinary tools he has access to, we're convinced your life will change for the better.

In 73 trading days, The Night Trader has already accumulated total winning gains of 929%.

And that's just from doing a few trades in his private account.

NO ONE - not even the best traders and analysts in the world (and we know many of them) - can make this kind of insane money - and all without using a single option.

But The Night Trader is not like everyone else...

He lives by his own rules.  He operates exclusively at night (when Wall Street is sleeping). And he only cares about one thing...

Growing his wealth every single day (by any means necessary).