Buying gold is a good idea in 2018 for investors not only looking to protect their wealth, but to also grow it.

According to Money Morning Resource Specialist Peter Krauth, the price of gold will rally significantly next year. He expects gold prices to hit $1,350 by late February 2018. But it's nothing compared to his 2020 gold price target.

Everyone knows that gold is an excellent hedge during times of uncertainty and political turmoil.

Events like North Korea's recent missile testing and the continuing controversies in Washington drove the price of gold from $1,150 to as high as $1,350 in September of this year.

Since then, gold has fallen back down to $1,273, as Bitcoin-mania gripped markets. But Bitcoin's 32% tumble in the second half of December reinforces the case for why Bitcoin is not at all a hedge like gold. 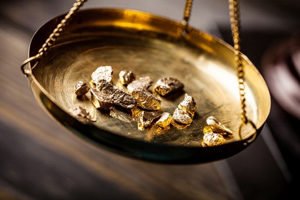 However, gold is well below its historical highs of $1,800 in 2011. And according to Krauth, both Bitcoin and the Federal Reserve have brought us a gold bottom.

Today, we'll show you the three reasons we're raising our gold price forecast. Plus, we'll explain whether it's better for you to buy physical gold, gold stocks, or gold ETFs...

According to Krauth, inflation will be a major boon for gold prices in 2018.

The current 1.6% inflation rate is its second-highest level in the last five years. That number is expected to move even higher as the stock market keeps reaching higher highs, says Krauth.

Inflation is the rate at which the price of general goods and services rises and the purchasing power of the dollar decreases.

That's why the Fed manages inflation by raising interest rates. This has kept inflation from getting out of control as the stock market rises.

Reduced short-selling in the gold market also indicates the price of gold will rise over the next three years.

Over the last year, the number of short positions on gold stocks has fallen. One indicator of short interest is the Gold BUGS Short Index (NYSE: HUISH). This index tracks short-selling on mining firms that specifically refuse to cut gold production based on gold price movements. In the last 12 months, HUISH has dropped 6.24%, indicating short interest in the broad gold sector is falling. This shows a shift in sentiment from bearish to bullish for gold.

Canadian gold mining company NovaGold Resources Inc. (NYSE: NG) shows an even starker change in sentiment. In the last 12 months, the volume of short bets on the stock declined 79%, to 522,400.

But wait till you see this next shocking trend, which predicts when gold prices will rise...