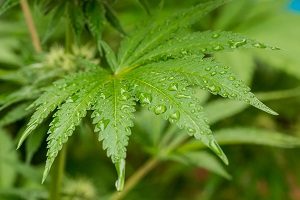 According to a recent report by Bioscience, "an estimated 22 liters of water or more per [marijuana] plant per day are applied during the June-October outdoor growing season."

But there's a flipside...

"When grown responsibly, cannabis uses significantly less water than some of California's other agricultural staples, such as almonds," said Hezekiah Allen, executive director of the California Growers Association, to Leafly on July 20. "And [when grown responsibly] it offers a considerably higher profit margin," he added.

Authorities have taken notice of the problem and are now cracking down on cannabis growers' water use ahead of California's total legalization.

How will that affect California cannabis growers and companies? Let's take a look...

Where Does Your Water Come From?

In an effort to balance environmental issues with marijuana's projected $20.2 billion market, California is introducing a new batch of rules and regulations specific to marijuana growers' water use.

"Growers won't be able to plant where there's not enough water to support their crops - something that could spell disaster for cultivators who rely solely on water from watersheds."

In addition, regulators will now be permitted to restrict cannabis cultivation if they can prove it's causing environmental harm.

For some growers - particularly in California's agricultural epicenters like the Emerald Triangle - growing is about to become "particularly tricky," according to Allen. "Growers won't be able to plant where there's not enough water to support their crops - something that could spell disaster for cultivators who rely solely on water from watersheds."

Most cannabis companies will be forced to spend a pretty penny updating their systems for compliance. While rainwater is free, the cost of a rain catchment system could cost anywhere from $250,000 to $300,000 for just one farm, according to Leafly.

But one company already has water conservation methods in place - and you can invest in it.

In fact, we've been recommending this one since 2016 - and we're ramping up our recommendation in the new year. It's one of our favorite marijuana "pick-and-shovel" plays for 2018 as it's poised for a 15% sales surge over the next year.

And while other cannabis companies struggle, these new water laws may help it make even more money.

What is The $0.0001 marijuana stock that would be most likely to reach one dollar in one year from today
Thank U what is name
Dave. Schrock

Dream on. If they knew you think they'd be working

We have s solution! Our product can help growers save 60 to 80% of their water usage.

They don't need to much water.and there is a lot of water business out there that will back up Canabis growers.

I look forward to getting this information