Bitcoin prices were slightly down today despite breaking news that billionaire Peter Thiel has invested a massive amount in the cryptocurrency. 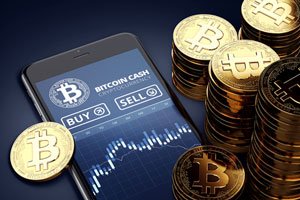 Thiel's Founders Fund purchased anywhere from $15 million to $20 million in mid-2017, according to The Wall Street Journal and other sources.

The firm's haul is now worth hundreds of millions of dollars thanks to Bitcoin's epic price climb last year.

On Monday, the market capitalization of the global cryptocurrency sector surged past $700 billion and touched $728.6 billion this afternoon.

Bitcoin now comprises just 34.4% of the global cryptocurrency market. While this is still a strong position in the global sector, it is a significant decline from the numbers above 60% that we saw toward the end of 2017.

Ripple is now easily the second-largest cryptocurrency by market capitalization. Ripple surged another 36% on the day, pushing its value to roughly half of Bitcoin's.

Interest from hedge funds has driven the price higher, according to Fortune. Tech investor Michael Arrington has announced a new fund that will be denominated entirely in Ripple.

Its proponents are so bullish that some are saying that it could become a global reserve currency in the future to help facilitate cross-border transactions among financial institutions.

The price of Litecoin continues to slide, while rivals like Cardano and Stellar continue to rally.

Litecoin has faced challenges in recent weeks, including from its own founder, Charlie Lee. He expressed concerns about being the face of the crypto coin, and he said he has sold all of his Litecoin holdings.

But there could be some good news for Litecoin owners in 2018...

Bullish analyst George Tung predicts that Litecoin will surge to as much as $1,500 this year, bringing its total valuation to roughly $82 billion.

Getting More Bullish on Blockchain

The Royal Bank of Canada released a very bullish report outlining the potential of blockchain technology and cryptocurrencies.

In a report released this week, RBC offers a possible shift toward decentralization of banking that unlocks a $10 trillion market.

"While the cryptocurrency space has many risks, the opportunity appears vast with constant technology updates," Mitch Steves, an equities analyst at RBC's Capital Markets, said in a report.

This is good information and I look forward to reading your newsletter. I Wish to buy some Ripple but have not been able . I do not own any Bit coin to trade . It seems the only source to buy from has been an Exchange.Can you heLP me. Thank you . John Vetter

Thanks for reading Money Morning. This overview of how to buy Bitcoin is a good place to start.