But Money Morning readers need to know this isn't a time to panic... 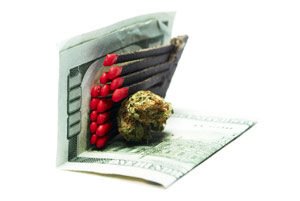 The sudden change to federal policy has marijuana investors nervous - especially those hoping to profit from cannabis legalization, like California's.

But now is not the time to panic. It's actually time to acquire an even bigger stake in pot stocks...

A Pot "Bombshell" Just Hit Canada: For our neighbors to the north, it's shocking news. But it could be the best news of all time for marijuana stock investors. In fact, this single "bombshell" event could unleash a new pot stock boom that will blow the doors off anything we've seen up to this point. And by putting a couple of hundred bucks into a handful of tiny Canadian weed companies, you could pocket life-changing gains - turning a few hundred bucks into a fortune overnight. Watch this now to get all the details...

Hi Michael,
Between you and Keith Fitzgerald teaching how to trade logically instead of emotionally, I did not panic because I knew ahead of time how much I was willing to loose and had tightened my stops before Opening Bell. Also, I had rememberedwhat Shah had said, keep your stops tight and you can always re-buy the stock, so every morning around 4:00am I make sure that my stops are in place to take profits should we have a fall like today. I lost 4% and 3/4 of my portfolio is cannabis. I now have plenty in my account to re-buy. Again I must thank all at money map press…I knew all of you would help me get to where I need to be.

There is so much fear and paranoia about Cannabis as people are very ignorant and uneducated about this plant. Too bad the "powers to be" can't seem to educate themselves about the REAL benefits of this plant – from medicinal uses to skin products, clothing, building products, food, etc. We truly have our priorities screwed up when we allow Big Pharma to put out catastrophic drugs that addict people, make them dependent on various drugs and continually prescribe life threatening drugs with outrageous side affects. Shame on us for depriving millions of people from using a natural cure and relief for many diseases. People need to get themselves educated!!