Thanks to Mark Zuckerberg's Facebook post today (Jan. 4, 2018) we now know that mass adoption of cryptocurrencies could be on the way....

If Facebook Inc. (Nasdaq: FB) accepts Bitcoin on its site, for example, the 1,364% gains from Bitcoin this year could be just the beginning of Bitcoin's growth. Facebook has 2.07 billion monthly active users (MAUs) who could be introduced to cryptocurrencies through the social media giant. 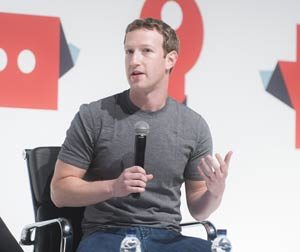 In his post, Facebook's CEO said the company was considering using cryptocurrency and encryption technologies on its platform.

"I'm interested to go deeper and study the positive and negative aspects of these technologies, and how best to use them in our services," Zuckerberg said.

There was speculation that Facebook would accept the cryptocurrency Litecoin on its payment platform because of a Dec. 21 Zero Hedge report, yet no concrete evidence emerged.

But this Zuckerberg post confirms Facebook is seriously looking into cryptocurrencies, and that could be a bullish catalyst for the prices of Bitcoin, Litecoin, Ethereum, and other coins to skyrocket...

One of the biggest knocks on crypto coins is that they can't be viable currencies when people can't use them for everyday transactions, like buying food or sending money to friends and family.

You still have to hunt down merchants who accept crypto payments on a case-by-case basis.

Zuckerberg could change all of that...

Facebook has 2.07 billion MAUs. With those billions of users getting introduced to cryptocurrency, adoption could drastically increase.

Can a Single Book Make You a Millionaire? Anyone with a computer or a smartphone can use this 10-minute secret to put $1,000,000 in their account. Every day, thousands of people are proving the success of this little book. Today, you can get it free. See how here...

The social media giant's Messenger app already allows users to send each other money, so some engineering work could help expand that to sending and receiving cryptocurrencies.

Facebook also already is partnered with Shopify, and that partnership has allowed Facebook to sell products directly on its site. According to its website, Shopify lets customers accept Bitcoin payments.

Facebook also launched a food-ordering service in October 2017, which could be updated to accept cryptocurrency as a payment.

Zuckerberg could also allow for games and other services to be purchased on Facebook with cryptocurrencies.

If more people are using virtual currencies on Facebook, they will also look for other places to spend their coins.

We don't have many details on what Zuckerberg will be studying about crypto beyond what he said in his post.

As more details emerge about Zuckerberg's plans, we will let Money Morning readers know through our free "Facebook and Cryptocurrency" Profit Alerts service.

"It's a money machine, plain and simple. Just keep turning the crank, and a steady stream of income can pour from it. The best part is once you set it up, practice it, and allow it to run, you'll be able to maintain it in 10-minute increments."

Here's how the strategy works...