TRON prices surged 24% as the crypto coin's founder, Justin Sun, proclaimed on Twitter Inc. (NYSE: TWTR) that a major partnership announcement is on the way.

Some investors are speculating that the partnership could be with Alibaba Group Holding Ltd. (NYSE: BABA), as Alibaba's CEO Jack Ma was a mentor to Sun. 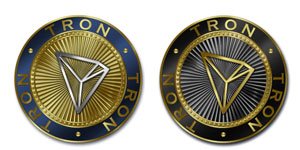 Thanks to the surge in interest, TRON found its way into the top six cryptocurrencies by market capitalization today.

According to TRON's website, the firm's "protocol is the blockchain's entertainment system of free content, in which TRX, TRON's coin, is circulated. Its native economic system enables an unprecedented one-on-one interaction between providers of digital entertainment content and ordinary users."

The website also said that "content providers will no longer need to pay high channel fees to centralized platforms like Google Play and Apple's App Store."

On Friday, the market capitalization of the global cryptocurrency sector hit $774.47 billion. Bitcoin represents 36.4% of the total market, a figure that is sharply down from previous months.

In a letter to investors this week, British investor Jeremy Grantham did not hold back his true feelings about the cryptocurrency.

He said that the size and speed of the Bitcoin price surge over the last year outpaces the bubbles of the South Sea Co. in 1720, Dutch "Tulip Mania" in 1637, and the Wall Street collapse of 1929.

"Having no clear fundamental value and largely unregulated markets, coupled with a storyline conducive to delusions of grandeur, makes this more than anything we can find in the history books the very essence of a bubble," Grantham wrote.

Parody Coin Is Now Worth $1 Billion

It's never a good sign when the creator of a cryptocurrency questions the valuation.

That has happened recently with the founders of Ethereum and Litecoin over the last few weeks.

So, imagine how the creator of a cryptocurrency that was created as a parody feels...

Let's check in with Jackson Palmer, the founder of Dogecoin, a cryptocurrency that parodies a famous internet meme of a Shiba Inu dog.

On Thursday, the market cap topped $1 billion, and it's entirely unclear what the purchase of the coin actually is.

"I have a lot of faith in the Dogecoin Core development team to keep the software stable and secure, but I think it says a lot about the state of the cryptocurrency space in general that a currency with a dog on it which hasn't released a software update in over 2 years has a $1B+ market cap," Palmer said in a conversation with CoinDesk.com.

Did you make big gains from Bitcoin, Litecoin, and Ethereum in 2017?

If so, Coinbase is actively reminding its users to declare their profits come tax time this April.

The cryptocurrency exchange listed its advice to traders on the Coinbase homepage this week, including a working beta model to calculate gains for the year.

However, investors are encouraged to speak with their tax advisor to determine the best accounting method.