At least one Bitcoin price prediction foresees the cryptocurrency going as much as five times higher in 2018 – to $75,000. 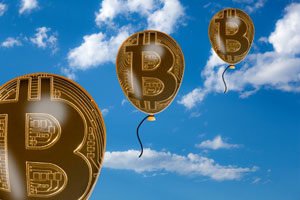 This Bitcoin price forecast comes from John Pfeffer, a London-based entrepreneur and investor who served as a partner at private equity firm Kohlberg Kravis Roberts for 11 years and has since founded several entrepreneurial ventures.

In other words, Pfeffer is a seasoned professional investor who hasn't been involved in cryptocurrencies (he was head of the European retail industry team at KKR).

Pfeffer's Bitcoin price prediction is based on the likelihood of several major developments that he believes could unfold over the next several years.

And his Bitcoin price target of $75,000 – revealed exclusively to Money Morning – is just an interim target. The catalysts he describes would push the price of Bitcoin several times higher in just two to three years.

Becoming a Store of Value Is the Key to Big Gains

After several months of looking into the cryptocurrency phenomenon, Pfeffer produced a 26-page report that was published Christmas Eve.

Given his background, Pfeffer set out to "consider cryptoassets from the perspective of a rational, long-term investor."

In his analysis, he concludes that the coin that fulfills the role of "monetary store of value" will be the most valuable. And Pfeiffer believes the cryptocurrency with the best chance is Bitcoin.

"It has more users; has decentralized (to the point of dysfunctional) governance; has more hashing power than any other crypto; is highly stable and robust; has been around longest; and has never been hacked," Pfeffer says in the report.

What's more, as the current most valuable digital asset, Bitcoin is already serving as the de facto store-of-value cryptocurrency. It's often referred to as "digital gold," a nod to the precious metal that has for thousands of years served as a reliable store of value.

Pfeffer says the odds of Bitcoin assuming this role on a large scale are now between 2% and 5%, and "likely much higher."

From there, he makes a series of Bitcoin price forecasts based on what will happen as the cryptocurrency becomes increasingly accepted as a store of value.

Pfeffer starts with how much capital is likely to flow from gold to Bitcoin. He figures that about 38% of global, above-ground gold is held as a store of value in the form of bullion. That translates to about $7.8 trillion.

But Pfeffer thinks Bitcoin also has a good chance to become a global reserve currency. (I quite agree, as I wrote about this possibility last June.)

The idea is that many countries, especially Russia and China, would rather not be forced to hold large amounts of U.S. dollars or any other nation's fiat currency to conduct international trade. And Bitcoin is the ideal solution.

"A non-sovereign, non-fiat, trustless, censorship-resistant cryptoasset would be a far better alternative for most foreign currency international reserves," Pfeffer writes.

He estimates that a cryptocurrency serving as the primary reserve currency would eventually comprise between 25% and 75% of international reserves. That's a range of $2.8 trillion to $8.5 trillion of value added to Bitcoin's market cap.

If you add that to the store of value amounts Bitcoin is likely to take from gold bullion, you get a market cap range of $4.7 trillion to $14.6 trillion. Dividing by the estimated maximum number of circulating bitcoins (18.2 million) produces a long-term Bitcoin price prediction of $260,000 to $800,000.

But all that will unfold over a period of years – probably a decade or more (Pfeffer doesn't offer a precise timetable, only suggesting that Bitcoin price increases are likely to come in spurts).

Still, he sees several major shifts taking place in 2018 that he believes will drive the Bitcoin price to $75,000 by the end of the year…

i want to buy but i don't know where and how i can buy. scottrade doesn't tell me how and where to buy. how do i get that information ?

You cannot buy from a traditional broker – you need to set up an account at http://www.coinbase.com – fill our the KYC (Know Your Customer) information, then you can purchase BTC, LTC, BCH, or ETH on the Coinbase Exchange by linking your bank account, or by credit card or Paypal. A good reference is also to review http://www.coinmarketcap.com for other "ALT" Coins.

I am trying to learn all I can about cryptos and I am interested in hearing what you are preaching.

Excellent post. I was checking constantly this blog
and I'm inspired! Extremely helpful information specially the final
section :) I take care of such information a lot.
I was looking for this particular information for a long time.
Thanks and good luck.