Chances are you've never seen any market swing like the ones we've seen with Bitcoin and other cryptocurrencies this year. The moves are incredible, creating massive wealth for those who got in early and triple-digit profits for those who can play the week-to-week volatility. 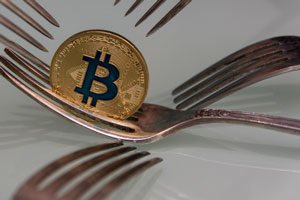 Still, many investors fear the incredible price swings we see in cryptocurrencies every day. It's only natural when prices are dropping 30% in just a matter of hours, like they did on Dec. 22.

Volatility itself is not necessarily a bad thing. A market with zero volatility does not move, and you cannot make any money beyond whatever dividend or interest payment you may get.

Despite such potential, Robinson had a warning for readers back in December. He was not pessimistic about cryptocurrencies in general or Bitcoin in particular. In fact, he said just the opposite, remarking, "I firmly believe these e-currencies are the wave of the future and still face huge upside."

The problem is that individual investors are usually not equipped, either psychologically or financially, to ride out the volatility storms that seem to occur frequently. Selling out too soon can leave huge sums of money on the table, but it is understandable to fear such wild rides lower – and higher.

But, despite all that, Robinson does not want you to cash out of Bitcoin completely.

If you do that, you'll miss out on the Bitcoin spin-offs, called "hard forks."

And if you play them right, they could mean gains of several hundred percent or more…

What Is a Cryptocurrency Hard Fork?

As you are likely aware, Bitcoin is based on technology called "blockchain."

A blockchain is a continuously growing list of records, called "blocks," which are secured using cryptography and linked together. Each block contains a hash pointer as a link to a previous block, as well as a timestamp and transaction data.

This makes it inherently resistant to modification of the data. The Harvard Business Review called it "an open, distributed ledger that can record transactions between two parties efficiently and in a verifiable and permanent way"

Cryptocurrency hard forks happen when developers feel the blockchain needs new features. These developers can also set up a crypto hard fork when they feel the cost of mining has gotten so expensive that only a few elite investors can participate.

With each fork, the crypto is subdivided into two currencies – the original and the new coin. To facilitate these forks, the community then spins off the fork coin to current owners… for free.

As Robinson reported, there were two major hard forks in 2017. The first occurred in August, when Bitcoin Cash emerged. That event marked the new currency at roughly $291; Cash quickly jumped to more than $400 before selling off again.

Another hard fork came in October, with the spin-off of Bitcoin Gold.

Bitcoin hit short-term bumps, but as you've seen, the price subsequently soared. These forks have been good for both Bitcoin and the fork coins.

And that's why you shouldn't be selling all your Bitcoin holdings. You want these hard forks and the profits they'll bring you in 2018 – and beyond. Sure, you can reduce your exposure, and your risk, by selling some of your Bitcoin, but be sure to keep some so you can participate in these forks.

With that in mind, these are the next cryptocurrency hard forks to watch.

These Are the Next Cryptocurrency Hard Forks to Watch

Let’s see if you have any REAL insights