It's also the perfect example of letting hype and "noise" drown out meaningful investing signals.

The "Money Pit" surfaced way back in the summer of 1795, when a boy named Daniel McGinnis found a fresh, circular depression in the ground under a large oak tree near his family's home.

So he started digging.

When he hit a depth of 10 feet, he found a makeshift covering over the hole made of flagstone – a generic flat stone used most commonly today as stepping stones on a footpath.

The Story of the Oak Island Money Pit

As he dug deeper, he found more flagstone, as well as rocks marked with strange symbols – but no treasure.

Yet over 200 years later, people are still searching for the treasure despite no evidence that there ever was any to begin with. And these aren't just a few hobbyists. Thousands of people, including the rich, famous, and powerful, have flooded to Oak Island for their shot at an imagined prize.

See which famous figures have fallen prey to the allure of the "Money Pit" – including a former U.S. president…

Anyone Can Be Caught Up in the Hype

The Money Pit's promise of profit – no matter how ill-founded – has attracted some of the world's most high-profile personalities.

John Wayne, the star known for playing cool-headed leaders, couldn't help but follow the herd to the Money Pit. In the 1940s, he owned a company that had acquired the rights to seek treasure on the island. In fact, he even prevented his Hollywood archnemesis, swashbuckling actor Errol Flynn, from getting in on the action.

Politicians have sought to get in on the action, too. In 1909, future U.S. President Franklin D. Roosevelt bought shares of the Old Gold Salvage and Wrecking Co., then traveled to Nova Scotia with the group to participate in excavations. 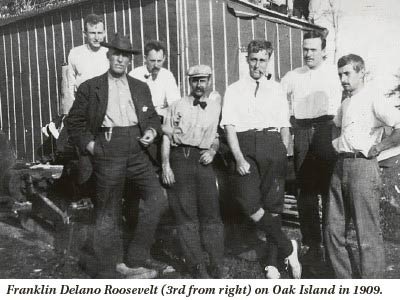 In fact, Roosevelt harbored a fascination with the Money Pit even as president, and according to his written correspondence, would have returned had it not been for the outbreak of World War II.

Canada's 15th Prime Minister, Pierre Trudeau, even showed up at the mysterious site with his three sons – one of whom is now Canada's 23rd Prime Minister, Justin Trudeau – one summer day in 1979.

Yet for all of this attention, there has never been any concrete evidence indicating the size of the treasure – let alone if there is one or not.

"Money Pits" abound in the markets.

Be it the latest tech IPO, an age-old retailer, or a new cryptocurrency, there is an endless supply of seemingly attractive investments that show no evidence of being profitable.

To avoid falling prey to a "Money Pit," pay careful attention to a company's management team, and determine if it falls in line with any of our six "Unstoppable Trends" – like energy and medication – for which there will always be a need.

Ask yourself every day if the company is still doing the things that made it attractive in the first place. Is the CEO still in place, and do you like his or her vision? Has there been a game-changing development in the company's industry?

Take the marijuana sector, for example. This industry is primed for record-breaking growth as more and more states legalize cannabis. It also aligns with the Unstoppable Trends of medicine, demographics, and technology.

But not all marijuana companies are going to see triple- and quadruple-digit growth. To avoid falling into a marijuana "Money Pit," you need to find companies with skilled management teams that are making themselves indispensable to the industry at large.

And if that seems daunting, don't worry. We'll be with you every step of the way.

We've already seen people collect massive gains from previous legalization announcements, but with the $20 billion in new wealth projected to flood the industry in California alone, this event is about to blow the doors off of anything we've seen so far.

Michael has narrowed down the pool to three of the best, most lucrative, and fastest-growing California pot stocks – tiny players that could turn a small investment into a six-figure payday.

But that's only possible if you go here to learn more now… before the money starts pouring in.