U.S. Treasury Secretary Steven Mnuchin said he is concerned about "bad people" using cryptocurrencies to "do bad things." In comments at the Economic Club of Washington, D.C., Mnuchin said the United States is working with other G-20 nations to make sure "that this doesn't become the Swiss numbered bank accounts." 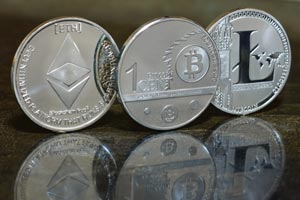 He also said that he is concerned about the risks surrounding speculation.

"I want to be sure consumers trading this understand the risks. I'm concerned consumers could get hurt."

A post on Medium.com by Bitfinex'ed, a blog "exposing fraud," speculated that Lee hasn't dumped all of his Litecoin holdings recently to avoid a "conflict of interest." Instead, it suggests that Lee unloaded all of his Litecoin to benefit from the massive price surge that occurred over the last month of 2017.

Below is a recap of the top cryptocurrency prices at 3:00 p.m. EST

On Wednesday, the market capitalization of the global cryptocurrency sector hit $698.19 billion. Bitcoin comprised just 32.9% of the total crypto market.

Ethereum prices are rebounding after a recent sell-off due to concerns about South Korean regulations.

Must Read: How One Single Stock Could Help You Become a Multimillionaire

The crypto community has been worried that South Korea was preparing legislation to ban cryptocurrency trading in the country.

However, it appears that such a ban would be a worst-case scenario should exchanges fail to adhere to new rules set by the nation's financial ministry

Cardano was the big winner out of the top cryptocurrencies on Friday.

The price of Cardano jumped over 14% and pushed the market capitalization to a little more than $21.9 billion.

Cardano is now firmly established as the fifth-largest cryptocurrency by market capitalization. The price surged higher on news that Cardano future contracts would begin trading on BitMex next week.

SmartCash Pops 90% in a Day

SmartCash, a privacy- and government-focused cryptocurrency, led the top coins in performance over the last 24 hours.

The coin surged more than 90% in a day, although it's uncertain what drove such a pop in price. SmartCash was originally forked from the ZCoin project last year.

I panicked and sold litecoin when it dipped to $222 wondering if i should have held on. may jump back in.