For example, Dentistry.com.uk published a report on Jan. 12, 2018, detailing the volatile price swings of cryptocurrencies and the high risk of fraud in the crypto market. The Boston Herald also suggested Sunday that a lack of regulation around ICOs has led to a "low barrier" that has "led to coins like Dentacoin." 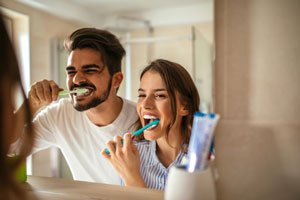 Despite the news, Dentacoin still has a market cap of $772 million.

Meanwhile, the price of Bitcoin saw some positive movement thanks to a sell-off in its rivals. Markets still remain slightly on edge about a potential ban on cryptocurrencies by the South Korean government.

South Korean authorities said that they will require "sufficient consultation and coordination of opinions" before they make a decision.
The vagueness suggests no true time frame, which could fuel additional volatility in the weeks ahead.

On Monday, the market capitalization of the global cryptocurrency sector fell to $707.51 billion.

Can Bitcoin Double This Year?

Bitcoin has lost a significant amount of ground in terms of its dominance of the total cryptocurrency market.

However, some Bitcoin bulls, like Fundstrat's Tom Lee, believe that Bitcoin's price could easily double in 2018.

The optimism comes thanks to increased institutional demand and an uptick in financial innovation around Bitcoin's ecosystem.

The price of Gas popped more than 16.4% Monday, but the real winner today was NEO.

The NEO project has two cryptocurrencies tied to it (Gas and NEO), and NEO prices climbed 21.46%.

Urgent: This almost-universal blunder could cost you $1.9 million in lost profits in 2018. Click here now...

NEO is considered the "Chinese Ethereum" and has pulled a lot of capital from investors of slumping altcoins like Ripple in the last week.

What is your house worth... in Bitcoin?

That's what a lot of people are asking after a story broke about a home seller in Malibu, Calif.

The owner is trying to sell his 9,000-square-foot home, and he's willing to accept Bitcoin as part of the $45 million payment for the mansion.

In an interview with CNBC, Dr. Wei Tzuoh Chen said he's willing to accept the risk when selling his beachfront property.

Is the Venezuela Cryptocurrency Project Already a Bust?

Venezuela's economy and currency have collapsed thanks to the feckless socialism project over the last two decades.

With hyperinflation at crippling levels, Venezuela's President Nicolas Maduro is trying to turn to cryptocurrency to stabilize his economy.

In December, Venezuela unveiled the petro, an oil-backed cryptocurrency that was priced in through the nation's oil, gas, and precious metal reserves.

Maduro is begging countries to adopt the cryptocurrency to help it overcome a "financial blockade" imposed by U.S. sanctions over drug trafficking and corruption.

Four Times Better Than Bitcoin? Everybody's going bananas over Bitcoin - and for good reason: It soared over 1,900% in 2017! But if you had invested in just one of the types of stocks revealed in this special report, you could have walked away with a rare and historical 7,679% profit instead. That's over four times more! More important, it's enough to turn every $1,000 invested into more than $77,000 ... and every $25,000 into nearly $2 million. To learn more, go here...