At least, that's what it seems like to us... 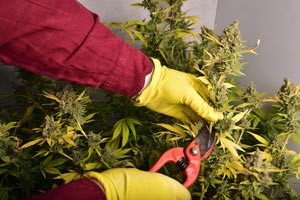 This is because larger companies trade on major exchanges regulated by the SEC and keep their money in institutions insured by the FDIC. Both are federal agencies that can prosecute illegal activity under federal law by seizing assets and delisting stock.

As a result, smaller marijuana companies listed on OTC exchanges can take more risks. They can operate virtually free of competition from more established and better capitalized firms, which means they can grow alongside this new industry.

For instance, one of the biggest marijuana-infused food companies in California started out with just four workers in a kitchen. It now employs 80 people in a 30,000-square-foot facility.

And that's why these first-mover marijuana penny stocks are poised to capitalize on the massive growth ahead for the legal North American pot industry.

But according to research firm ICF International, revenue from all legal cannabis sales are estimated to eventually reach $20 billion a year - just in California.

That's why, today, we're showing you how to profit with three of our top marijuana penny stocks to buy for less than $2. One of them even trades for less than $0.50.

Now, here's the first marijuana penny stock on our list...

The company's lead product, INM-750, is a topical drug for the treatment of patients with epidermolysis bullosa, a genetic condition which causes skin to blister easily from minor friction.

This stock is one of the safer ones on this list for two reasons. First, it's based in Canada, and the Canadian government is expected to fully legalize marijuana in the country in summer 2018.

Second, even if recreational marijuana legalization hits a roadblock in the United States or Canada, demand for cannabis-based drugs will not decrease thanks to widespread acceptance of medical marijuana.

URGENT: Collect a Colossal Payday Thanks to California's Legal Cannabis - Click Here Now to Learn How to Position Yourself for Windfall Profits

Up next is a U.S. company that's positioned to grow from multiple product channels...

On the drug production front, GB has a contract research agreement with the University of Seville to develop a THC-free, cannabis-based chronic pain drug.

GBLX shares are a bit riskier than IMLFF shares, because GBLX is based in the United States.

But compared to other marijuana penny stocks in the United States, GB Science's broad focus increases the chance that one of its revenue streams will take off.

Now, as promised, here's a marijuana penny stock trading for less than $0.50...

I would like to get in on the penny stock

I would like to know more about this subjet,thank you

how to get to buy the stocks??

Don B.
Reply to  WILBUR

Wilbur, I had Tardeking which became Ally. The problem is, they won't allow you to buy Canadian stocks and they have a per stock fee. I switched to a broker that "fixed" both of the above problems.

Can you give me some marijuana penny stock on the Nasdaq and Nasdaq small cap exchanges because the the broker takes 30 days to fill (otc) the order (gtc) to sell.

I am a complete amateur when it comes to buying/selling any stocks.
I would like someone to tell me which company to open an account with.
Thanks

I opened on
TD Ameritrade. Just fund your account and start buying. I bought one of their picks and am up almost 300%????

I would like to invest as soon as possible. Thanks

I would like to know more able buying this stock. How do i get to it.

How do i buy stock ?

how did you find the information to invest in the other pot stocks. i would like to know to know how to find how i can invest them and where . do you have to have your own brokerage account? I would really appreciate your help Sandra. pls e mail me .

You will need a brokerage account. Fidelity and some others allow you to trade in these penny stocks on the OTC markets. You can do it online for about 5 dollars a trade.

Marri,
You can find all the Marijuana information by searching on Cannabis or Marijuana. Yes, you need to open a self directed broker account. You can easily do that on the internet.

Nasdaq doesn't deal with penny stocks nor Marijuana stocks, that's for the OTC. I' never had a problem with dealing with OTC through my broker, sometimes getting filled in seconds!

I was looking for a low cost broker when i was a rookie. I found Tradeking first which became Ally. I thought they were great. then I found out that they don't allow investments in foreign stocks (Canadian) and that they charge aper stock fee on penny stocks.
That's when I found my current broker which has no per stock fee and does allow foreign investment.

Who is this broker with nofee per trade?And takes OTC orders?

That's what I did 6 mos ago with 10 marijuana stocks; some have doubled; 2 have Tripled !!
Good Luck, Josh, in Orlando

If anyone would like help on how and where to go to invest in these stocks, please email me at sweetwaterinsp@gmail.com. I am new at this as well and I spent hours and hours on how to figure this out and find the perfect place to buy my stocks at. So please feel free, I am happy to help:)

How do I get started?

What is the best and cheapest way to buy penny stocks?

I have to buy this tsock, However im a new comer in this industry, can some one genuine introdue to me a genuine brooker, nowadasy alot of fake brookers going around

Looking for knowledgeable info regarding stocks.

Robinhood is a great app for buying stocks with no commission charges. But they don’t have otc stocks…ETrade is good for many low priced over the counter stocks but you will have to pay a small commission. Also, you can short stocks at ETrade and not at Robinhood.

i am new at this where do i purchase these penny stocks that have the greatest potential i need 2 know so will u tell me please joseph f. castagna

Would like to know how to navigate purchases of pot penny stocks.