The surge in Bitcoin and other cryptocurrencies during Q4 2017 centered on rising expectations that institutional investors would pour money into the space.

Well, today, one of the top investment institutions officially snubbed Bitcoin. Tim Buckley, CEO of Vanguard, told CNBC in an interview that there will never be a Vanguard Bitcoin Fund. 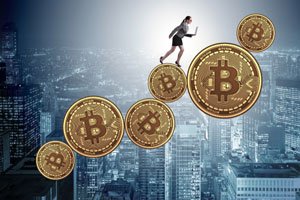 Buckley went on to say that his firm avoids "assets that don't have underlying economic value."

In other cryptocurrency news today, Bitcoin faced a sell-off over the weekend.

Traders around the globe are still afraid of the possibility of additional regulations and crackdowns from the South Korean and Chinese governments.

And it appears they have reason to be concerned...

South Korea announced today it would collect up to 24.2% in corporate and local income taxes from the nation's crypto exchanges this year.

Korbit, a Korean exchange, also announced it will not accept deposits from non-citizens. The decision comes a month after regulators ordered the country's exchanges to confirm user identities.

The action is part of an effort to curb excessive speculation, reduce money laundering, and increase transparency in the market.

On Monday, the market capitalization of the global cryptocurrency sector dipped to $504.4 billion.

Just 10 of the top 100 cryptocurrencies by market capitalization finished in the green Monday.

Bitcoin has been under significant pressure over the last week thanks to the rumors that governments in Asia will start heavily regulating the crypto markets.

Last week, Yonhap News in South Korea reported that the nation's finance minister had said "the shutdown of virtual currency exchanges is still one of the options" being debated among regulators.

But despite the bearish turn in price, Bitcoin optimists continue to offer bold calls for the year ahead.

He called the recent slump to $9,000 a buying opportunity for investors.

As we've explained in the past, initial coin offerings (ICOs) are ripe for scammers looking to take advantage of investors trying to hop on the cryptocurrency craze.

For that reason, regulators continue to explore ways to tighten rules around capital raising in the cryptocurrency space.

According to the research report, more than 10% of all money raised in ICOs has been lost, stolen, or the subject of hacking attacks.

If there's one thing Tom Gentile loves more than money, it's fast money. That's why, for the past four months, he's been working on a new invention to help you get profits in your hands even faster. In fact, you could be looking at an extra $2,000, $4,000, or even $6,000 in four days or less. To be one of the first to see what Tom's uncovered, just click here...