The latest Bitcoin price predictions for 2018 show little restraint, despite prices falling 50% from their all-time high set in mid-December.

Bitcoin bulls have issued predictions ranging from a relatively modest $24,000 to a stratospheric $250,000. 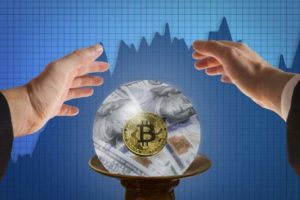 That means the Bitcoin bulls foresee gains of anywhere from 118% to 2,170% from today's levels.

That's in line with what we've seen the last two years...

Featured: The Best Place to Buy Bitcoins: A Step-by-Step Guide for Beginners

These Bitcoin price forecasts are all the more remarkable given the seemingly endless stream of bad news that has dogged the cryptocurrency in recent weeks.

Why the Bitcoin Price Will Shrug Off the Negative News

Bitcoin has suffered from moves by the Chinese government to further restrict Bitcoin trading (it shut down the domestic exchanges last September) and curb mining (about 70% of Bitcoin mining is done in China).

The price of Bitcoin has also taken a hit from rumors South Korea was considering a total ban. But this week, the government decided instead to ramp up regulations, putting a stop to the use of anonymous bank accounts to trade the cryptocurrency.

Back in the United States, the Securities and Exchange Commission (SEC) issued a letter explaining in blunt language why it won't be approving a Bitcoin ETF (exchange-traded fund) any time soon.

But none of these developments truly threaten Bitcoin. Trading in China will likely move underground. The Chinese miners are already making plans to relocate to friendlier locales, such as Canada.

And the new South Korean regulations will serve to reign in excesses - a positive thing for Bitcoin in the long run.

The folks making those lofty Bitcoin price predictions realize the situation is not nearly as dire as the mainstream media would have you believe.

Bitcoin has survived the collapse of its biggest exchange (Mt. Gox, in 2014), the rise of more than 1,300 rival cryptocurrencies, and a civil war over scaling that resulted in the Bitcoin Cash hard fork.

What's more, the price of Bitcoin will have several new catalysts driving it in 2018, such as the Lightning Network. Lightning technology addresses Bitcoin's two biggest drawbacks right now - slow confirmation times and congestion on the network.

So these dramatic Bitcoin price predictions come as no surprise to me...

Very informative from people already in the Trade of BTCs!