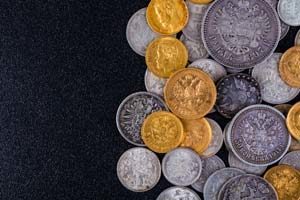 After falling 30% through the end of 2016, silver is posed for a significant breakthrough in 2018.

So significant, in fact, that we think the price of silver could skyrocket more than 1,300% from current prices...

We've already seen the silver price rally start. In the last five weeks, the price of silver has risen nearly 9%, indicating the metal could be on the verge of a breakout.

Money Morning Resource Specialist Peter Krauth has found three key factors that don't just suggest a mild, upward swing. According to Peter, the underlying catalysts could provide a gain of over 1,300% in the long term...

With such massive profit potential on the table, Peter is more than enthusiastic about getting a piece of the action. "I think every investor should be positioned in this precious metal right now," he says.

At the end of 2017, futures traders became the most bearish they've been since 2004.

And that's actually good news for silver bulls. According to Peter, "such extremes have historically marked turning points."

"Once silver sentiment becomes so extremely bearish, odds are its price has hit a bottom of sorts," he says. "Look at it like this: Silver becomes so hated, there's no one left to sell, and so buyers start coming into the market."

Since late December, the volume of futures contracts is up roughly 75%, indicating that hedgers have turned bullish on the future of silver.

More importantly, these contracts are up in large part due to commercial hedgers. In silver's case, commercial hedgers are often the miners and operations managers responsible for the production of the commodity.

According to Peter, these commercial hedgers are "widely considered to be 'smart money,' as they are involved in daily operations and movements of specific commodities."

As the "smart money" is betting on the future of silver, there is a significant chance that the precious metal is heading for significant gains in 2018.

The spike in futures contracts has not only gradually driven the price up, it's also created an increasingly tight range for silver prices, which Peter believes will cause a breakout...

Peter says that this narrow trading range is part of a "compression" that will cause the price of silver to eventually break out. "Silver price has been establishing higher lows. The first of these was in July 2017, then again in December of the same year," he says.

According to Peter, silver's increasingly shallow lows will likely result in a positive break out thanks to the bullish nature of futures traders.

"Given that we see silver futures are being traded with increasing volume, and the overall trend is higher, in my view the breakout is overwhelmingly likely to be to the upside," he says.

However, Peter's third catalyst is the clearest indicator he's seen for higher silver prices yet.