And he revealed it just last night at the World Economic Forum (WEF) in Davos, Switzerland.

That's when the Hungarian hedge fund aficionado warned that the "survival of our entire civilization is at stake," reported Reuters this morning.

He also offered up a solution to the U.S.-North Korea debacle that just might be the Hungarian hedge funder's worst idea to date… 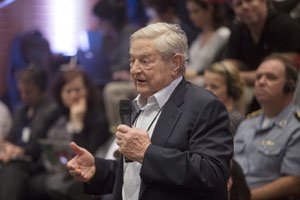 Soros wants the United States to recognize North Korea as a nuclear power.

"The only sensible strategy is to accept reality, however unpleasant it is, and to come to terms with North Korea as a nuclear power," he said.

This could very well have been George Soros' worst idea ever.

To back off from pressuring North Korean dictator Kim Jong Un now would be akin to telling him, "If you stop making more weapons and knock off the threats, you can keep what you have."

U.S. Secretary of State Rex Tillerson stated on Jan. 17 that the object of negotiations with North Korea "is the complete, verifiable, and irreversible denuclearization of North Korea."

As of right now, the diplomatic ball is in North Korea's court; Pyongyang can either willingly relinquish its nuclear weapons program, or the United States will make it do so.

Tensions are at an all-time high, which is sending one specific class of stock through the roof.

Here's one of our favorite plays to do just that…

Take a look at the companies PPA holds…

And Northrop Grumman Corp. (NYSE: NOC) has a wide spectrum of operations that covers everything from advanced sensors, to missile defense, to cybersecurity.

Are you saying that we should attack North Korea if they won’t give up their Nuclear weapons?
Should we use Nuclear weapons or traditional weapons?
Think this might be the worst idea you ever had.

Reality, however painful is reality, North Korea, Pakistan, India and many others are already nuclear powers and will remain so and more will join the list.

Nuclear attack can only end in mutual destruction. The US lost in 1951 and its about time to accept that.

If the US wasn't so keen on pushing regime change in other countries, like Iran, Venezuela, Iraq, Syria, and Libya, maybe their governments wouldn't feel the need to tool up with nukes. Libya and Iran did drop any nuclear ambitions they had. Subsequently, Gaddafi was murdered in a ditch, and his country devastated, and now Washington is sabre rattling at Iran, and trying to strangle their economy. Why would Kim give up the insurance policy he worked so hard to get ? In any case, as Barry Worshoufsky said, are you going to start a nuclear war to prevent nuclear war ?