Gold prices are nearing a two-year high, and I didn't think that would be possible this early in 2018...

But the key driver of rising gold prices continues to be the sinking dollar, and the Trump administration's mixed signals on the dollar are helping push it down. 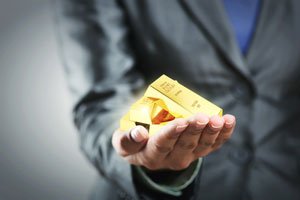 The U.S. Dollar Index (DXY) fell down to 90 on Tuesday, just before U.S. Treasury Secretary Steven Mnuchin spoke the truth to a crowd at Davos: The administration wants a weaker dollar.

"Obviously a weaker dollar is good for us as it relates to trade and opportunities," Mnuchin said at Davos.

While Mnuchin's comment was an "open secret" - a weaker dollar is better for American exports - traders still reacted with shock.

The DXY dropped a full point down to 89 by the end of Wednesday, while the price of gold jumped 2.4% between Monday and Thursday.

But the next day, U.S. President Donald Trump, who had previously supported a weaker dollar, told CNBC that, "The dollar is going to get stronger and stronger and ultimately I want to see a strong dollar," adding that the treasury secretary's statements had been misconstrued.

That put a lid on gold prices and kept them from reaching their two-year high.

Here's what else moved gold prices last week, plus my 2018 gold price target...

After ending the previous week at a very respectable $1,330 per ounce, the price of gold tested breakout levels.

It only takes 10 minutes a week to double your way to $1 million: This strategy doesn’t require any special training – yet it could potentially put $1 million in your bank account faster and easier than you ever dreamed… 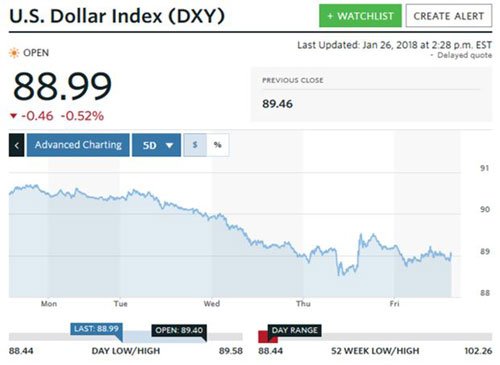 But Trump's about-face on the dollar on Thursday (Jan. 25) bolstered the greenback and dented gold. You can see the effect of his comments in the DXY chart, which pops from 88.60 to 89.50 within a couple of hours.

The dollar would also weaken slightly to consolidate around 89 on Friday (Jan. 26). That allowed gold to open at $1,350, a level it seemed stuck at by late afternoon, as it neared the end of the trading week.

But make no mistake, these are bullish trends for gold prices in 2018. Here's where I see gold prices heading next...

My Next Target for Gold Prices in 2018