Bitcoin prices are falling today thanks to concerns and some misunderstandings of cryptocurrency regulations in India.

India's Finance Minister, Arun Jaitley, made a budget speech today in which he said his country does not recognize cryptocurrencies as legal tender. 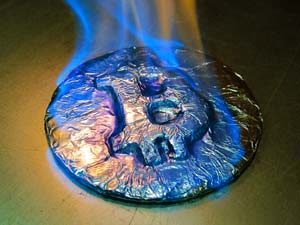 However, some mainstream media journalists claimed that a ban on cryptocurrencies in India was imminent, according to CoinTelegraph.com.

And on top of all that, The New York Times reported yesterday that the exchange Bitfinix has inflated digital currency values.

The report indicates that the exchange has a "checkered history of hacks and opaque business practices."

In December, the U.S. Commodity Futures and Trading Commissions (CFTC) sent the exchange a subpoena to discuss a virtual currency called Tether.

Developers of Tether have claimed that the cryptocurrency is backed by the U.S. dollar. However, investors have worried that hundreds of millions of dollars in new Tether coins were created and injected into the market.

As a result, these coins were likely used to purchase other cryptocurrencies, which may have fueled a rally in prices in November and December.

Should Tether be found to be insolvent, it's unclear just how devastating of an impact it would have on the global cryptocurrency markets.

On Thursday, the market capitalization of the global cryptocurrency sector plunged to $448.99 billion. That figure is down sharply from more than $800 billion just 30 days ago.

Bitcoin represented 34.0% of the total cryptocurrency market, with a market capitalization of $152.16 billion.

Only one cryptocurrency in the top 100 by market capitalization saw gains on the day. DigixDao, which gained 23.49%, is "a new form of cryptographic asset in that it is a Decentralized Autonomous Organization or DAO for short," according to its website.

But that hasn't stopped one of Wall Street's biggest bulls from calling today's price a top opportunity to get into the cryptocurrency.

Fundstrat's Tom Lee said in mid-January that $9,000 would be a "major low" for Bitcoin.

At these levels, he sees "the biggest buying opportunity in 2018" for Bitcoin and has maintained a year-end price target for Bitcoin of $25,000.

What's the Deal with Tether?

As noted above, the CFTC is moving quickly to examine the cryptocurrency's operations. This week, Bloomberg reported that Tether and Bitfinix both share the same CEO, Jan Ludovicus van der Velde.

Bloomberg also reported that neither firm had previously disclosed its management or headquarters on its sites. The report came after many people began asking questions about whether Tether had been used to prop up Bitcoin prices in December.

The story got much more confusing after Tether stopped working with its only auditor, Friedman LLP, last week.

An audit had begun after many people accused the development team of creating lots of crypto tokens "out of thin air." The charges from many people in the community suggest that Tether was used to purchase Bitcoin and help sustain prices.

The auditor had said back in September that the firm had enough U.S. dollar reserves.

However, Friedman had said it hasn't been able to authenticate all of the firm's records.

Tether had previously refused to name the banks where it houses roughly $400 million in reserves. Bloomberg journalists have said the company offered to reveal those names only if the media firm signed an NDA.

The editorial team turned down the offer.