The congressional budget deal that passed just before daybreak this morning (Feb. 9) is one sneaky piece of legislation.

That's because it set the standards for the next two years of government spending, upending crucial budget control legislation.

The excess spending the new budget agreement allows will balloon America's federal deficit to the point of unsustainability, meaning cuts will have to be made elsewhere to shore up costs.

Congress' Budget Deal Is the Beginning of the End for Entitlements

The new budget agreement will force Congress to cut entitlements. 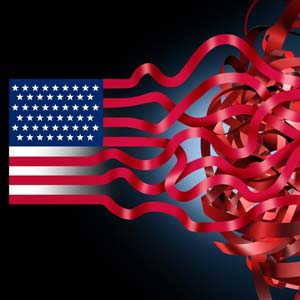 That's because it rolls back the Budget Control Act (BCA), enacted in 2011 to keep federal spending under some semblance of control. The new agreement flagrantly disregards the BCA, mandating that government spending increases by $300 billion over the next two years (roughly $80 billion per year on defense, $64 billion per year on non-defense).

That $300 billion sum will be added to Uncle Sam's tab – which is already expected to grow an additional $1 trillion over the next 10 years thanks to the Tax Cuts and Jobs Act.

These expenditures can't just grow unimpeded. Something has to give.

That's why this budget agreement spells doom for Social Security, Medicare, and welfare as we know it.

Congress Has Been Trying to Cut Entitlements for Months

In March 2017, Congress released the American Health Care Act as a replacement to the Affordable Care Act (Obamacare).

The AHCA sought to cut $880 billion in Medicaid spending by 2026, which would have forced 14 million people out of the program, according to the nonpartisan Congressional Budget Office.

The bill failed to pass.

Get the latest out of D.C. – plus how to stay one step ahead of the politicians – the second it's released with our free Profit Alerts. Learn more here.

In May 2017, members of Congress proposed slashing more than $400 billion in entitlement spending – which accounts for 59% of the annual budget – through the reconciliation process in order to balance the national budget. The proposal, part of the House Budget Committee's fiscal 2018 budget, would have forced each department to make sweeping cuts without any consideration for the needs of each department or the populations they serve.

Some analysts believe that even President Trump's tax cuts – and the resulting $1 trillion deficit increase – will be used to justify entitlement cuts.

"That [deficit increase] will be a rallying cry for why [Congress members] have to deal with entitlement programs, even though they created the problem," Dee Mahan, director of Medicaid initiatives for Families USA, a consumer healthcare advocacy group, told CNBC on Dec. 6.

Indeed, immediately after tax reform passed, House Speaker Paul Ryan – arguably the most vocal proponent of entitlement cuts in Congress – admitted that GOP legislators' targets for closing that future trillion-dollar gap include Social Security, Medicare, and welfare cuts in the very near future.

"We're going to have to get back next year at entitlement reform, which is how you tackle the debt and the deficit," Ryan said that day, according to Vox.

And now, Congress just added $300 billion to the fire.

It just fries me every time I hear one of those entitled A**holes in DC refer to Social Security as an entitlement!!! The only entitlement was when Ronald Reagan and congress raided the peoples trust fund and put an IOU where the surplus was and continue to this day.

I being self employed pay 13% into SS and medicare out of every dollar I "earn"! Raise the cap on the cutoff from what it is now I think around $120,000 and the problem would be solved.

We need term limits before morons like Paul Ryan get to much say so in policies.

That was Lyndon Johnson, not Ronald Reagan.

I totally agree David. The problem actually goes back alot farther, i believe to LBJ and letting them use the trust fund like a cash fund to spend on anything they wanted. If the money was still there and only used for the purpose it was intended there would be more than enough to take care of SS and Medicare. None of these guys really care, they have their lifetime pensions and healthcare that none of us can get access to. I have decided the only way to take care of this is a Convention of States. Please look into this and tell others. Washington is no longer worried about us little guys.

What are you calling entitlements? SS certainly is not one of them.