That's because Fed rate hikes will play a primary role in fueling the already bloated national debt ($20.6 trillion and counting) and America's ability (or inability) to keep up on the interest payments.

Trending: What to Do When the Markets Get the Jitters

And those skyrocketing payments will hit your retirement in several ways, most notably by reducing the amount of money available to finance Social Security payments.

Interest payments on the national debt currently cost $269 billion per year, consuming about 6.8% of the federal budget and representing 1.4% of the nation's GDP.

But those costs are expected to rise rapidly as Fed rate hikes accelerate the amount of interest the United States must pay on its obligations. 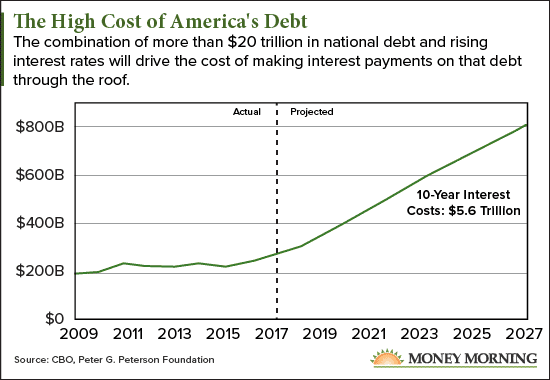 Since ending its policy of near-zero interest rates at the end of 2015, the Federal Open Market Committee (FOMC) has raised its benchmark rate five times, increasing it from 0.25% to 1.5%.

At least three more Fed rate hikes are expected in 2018, with several more possible in 2019. The higher interest obligations of new U.S. debt sold in the wake of these hikes will compound over time, digging America into a deeper and deeper hole.

According to projections by the Congressional Budget Office (CBO), interest payments in 2027 will balloon to $818 billion, growing to 12.35% of the federal budget.

The problem gets increasingly dire as you project further into the future. The CBO forecasts that by 2047 interest on debt will gobble up 21% of the federal budget - three times as much as it does now. In dollar terms, interest on our debt will reach an astounding $5.24 trillion - more than the total 2018 federal budget of $4.1 trillion.

Here's why this is trouble for your retirement...

Why Fed Rate Hikes Pose a Risk to Social Security

The first thing to realize about interest payments on U.S. debt is that it absolutely must be paid. Not paying would put the United States in default on its obligations. That would destroy the nation's credit rating, dramatically increasing interest rates on new borrowing - the last thing you want when you're already drowning in debt.

As the rest of the baby boomers retire over the next decade, the costs of funding these programs will also rise substantially.

Take Social Security. People have been assured that the $2.28 trillion trust fund will cover retiree checks through 2033.

But the so-called trust fund is nothing but a pile of IOUs in a West Virginia filing cabinet. They're "special obligation bonds" that must be bought back by the U.S. government.

And the money to buy those bonds must come out of the federal budget, unless the weak-willed politicians in Washington raise taxes.

Something will have to give. And as we've seen, it can't be interest on the debt. The pressure from the growing interest payments increases the possibility that benefits will be cut even before the trust fund runs out in 2033.

But the government's money problems - which will be passed on to you - go even deeper...

The Government Is in Budget Quicksand

As interest payments eat up an ever greater portion of the federal budget, the government will be forced to borrow more money to cover the budget deficits they cause - essentially using one credit card to pay off another.

This will push the national debt further into risky territory in relation to GDP, a measure of fiscal sustainability. According to the CBO, the ratio of debt held by the public to GDP was 77% in 2017. 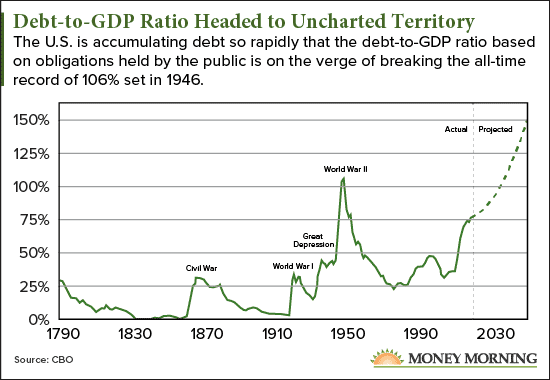 Governments and central banks know only too well that debt on that scale must be dealt with to avoid such crippling problems as:

And it should come as no surprise governments have an underhanded strategy for offloading an excessive debt burden on citizens.

How the Government Secretly Steals from You