The price of U.CASH surged to $0.2076 and was one of the top-performing cryptocurrencies on Monday.

However, it remains unclear what has driven this price surge, leading many to believe that a pump-and-dump scheme is behind the gains.

The surge comes a week after its development team posted a video on Facebook that showcased its new offices. 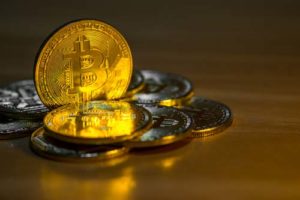 According to the company's mission statement, U.CASH aims to "build a global network of retail and individual converters providing cash to digital conversions to and from our ecosystem, helping people worldwide to unbank."

Meanwhile, markets are also monitoring updates over a malicious mining software that impaired more than 4,000 government websites around the world starting on Sunday.

The software was designed to harness the power of all of these computers to mine cryptocurrencies. A similar scheme has taken places in recent months tied to the mining of Monero.

Below is a recap of the top cryptocurrency prices at 3:15 p.m. EST…

On Monday, the market capitalization of the global cryptocurrency sector hit $428.08 billion.

Bitcoin represented 34.7% of the total cryptocurrency market with a market capitalization of $148.3 billion.

The price of Bitcoin pushed back above $9,000 over the weekend, rebounding from the immense sell-off that rattled investors last week.

The price steadily increased due to last week's hearing of regulatory bodies before the U.S. Senate Banking Committee. Traders appear to be taking a wait-and-see approach to regulations, with many people selling and sitting on the sidelines as regulatory considerations develop.

Must Read: The Best Place to Buy Bitcoins

Over the weekend, IMF Chief Christine Lagarde said that cryptocurrency regulation is inevitable in the future.

In an interview with CNN, Lagarde said that illegalities around Bitcoin will drive agencies around the globe to create a framework for cryptocurrency regulation.

"There is probably quite a bit of dark activity [in cryptocurrencies]," she said in the interview.

"We are actively engaging in anti-money laundering and countering the financing of terrorism. And that reinforces our determination to work on those two directions."

Nano Takes a Beating from Hackers

Another day, another major cyber event hit the cryptocurrency industry. Hackers, according to an exchange statement from Friday, hit the Italian coin exchange BitGrail.

They took off with 17 million units of Nano.

Given that Nano is trading around $10 per coin with a market capitalization in the top 25 cryptocurrencies, the theft is pegged at roughly $170 million.

It's been a volatile last seven days for E-Coin.

The little-known cryptocurrency had pushed into the top 25 currencies by market capitalization last week.

However, the price collapsed and was likely due to a pump-and-dump scheme.

Today, the price of E-Coin surged more than 218.97% and pressed its market capitalization to $332.4 million.

The new fork is scheduled for Feb. 18, and it will create a new coin called "LitecoinCash."

We will have a detailed report about the Litecoin hard fork and LitecoinCash later in the week. To make sure it hits your inbox as soon as it's published, sign up for our free Profit Alerts service.

The Perfect Way to Kick Off the New Year: Fast Extra Cash Opportunities

Even better, it takes only 10 minutes a week to start collecting any profits.

And at the rate it's been going, with returns arriving every 15 days on average… it adds up to $162,000 every single year.

It's the most surefire way to pick up extra cash in 2018.