At least, that's what the talking heads on TV said. But they were wrong... 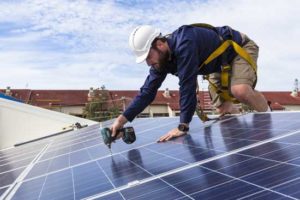 Publications including Time and Forbes were unified that the solar tariffs would harm China's solar industry.

But here at Money Morning, we believe that Trump's solar tariffs and the media frenzy surrounding them are creating an excellent profit opportunity in one of the most explosive sectors around the globe.

We think the solar industry worldwide is strong enough that Trump's solar tariffs, even at 30%, won't slow it down.

And the overreaction by the media is creating a buying opportunity for one of the world's best solar stocks.

Here's why the solar tariffs aren't bothering us - and how you can get one of the best solar investments at a discount right now...

There are two reasons we're not expecting the solar tariff to harm the solar industry, including Chinese solar stocks.

First, the prices for solar panels are dropping rapidly.

That means even with a 30% tariff, solar panel prices will fall so much the tariff will be hardly noticed.

The cost of solar panels has declined almost 80% over the last eight years. In 2017 alone, they fell 20% from 2016 levels. As technology for solar energy has gotten better, the expense of development of solar panels and their installation drops.

That's why a 30% tariff won't be more than a bump in the road for the solar panel industry, and it's one you can take advantage of.

China uses 5.9 kWh of electricity every year, which is 50% more than the United States uses. And it's only going to grow. To meet this massive demand, China's government is pushing solar power as a solution.

But the potential for solar power in China is simply staggering...

Right now, solar-generated power constitutes only 5% of the country's production of energy. Contrast that with coal, which produces 59% of China's energy needs.

If solar-generated power increases to be just 50% of the current share of coal, or about 29% of overall energy use, then China's solar industry will skyrocket.

It's no surprise, then, that Wood Mackenzie forecasts that solar power in China will increase a staggering 700% by 2035.

And right now, investors can get in early on China's incredible solar growth potential by buying the best solar stock of 2018 at a discount...

The Best Solar Stock of 2018 Will Overpower Trump's Tariff