The developers behind Pac-Man and Pong are planning to launch their own token in the near future.

The so-called "Atari Token" is part of a deal between the iconic video game company and a Gibraltar-based firm called Infinity Networks. 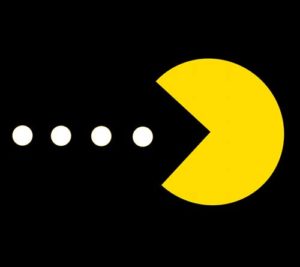 This is actually the second time that Atari has had an "Atari Token." The first iteration was designed for in-game purchases.

However, the new one has a bit more of an ambiguous purpose…

"Our aim is to take strategic positions with a limited cash risk, in order to best create value with the assets and the Atari brand," the company said in a statement.

Below is a recap of the top cryptocurrency prices at 12:00 p.m. EST.

On Friday, the market capitalization of the global cryptocurrency sector hit $480.36 billion.

Bitcoin represented 35.5% of the total cryptocurrency market, with a market capitalization of $170.5 billion.

The price of Bitcoin stayed above $10,000, a critical psychological point that could attract new capital back into the world's largest cryptocurrency by market capitalization.

Comedian Ellen DeGeneres chimed in on Bitcoin during her talk show Thursday. In an attempt to explain Bitcoin to her audience, she accurately portrayed the confusion around cryptocurrencies.

"Everybody is talking about Bitcoin, nobody understands it," she said.

"It's like a plot twist in a confusing movie, when you're watching a movie and your friends are acting like they know what's going on, and you're like, 'Yeah, I do too.'"

DeGeneres concluded that Bitcoin would leave investors with one of two paths. "Basically, if you invest in Bitcoin, you'll either be a millionaire or you'll be totally broke," she said.

The price of Litecoin pushed above $230 as markets prepare for the Litecoin Cash (LCC) hard fork on Sunday, Feb. 18. Despite claims that the new Litecoin Cash is a scam by LTC founder Charlie Lee, the development team behind the new currency will proceed as planned.

Here's what you should do after the Feb. 18 hard fork takes place.

CFTC Warns About Pump and Dumps

Not long after the Commodity Futures Trading Commission (CFTC) advised U.S. regulators to tread lightly on cryptocurrency exchanges, it had a strong warning to investors in the sector.

On Thursday, the agency warned crypto traders about the rise and dangers of "pump-and-dump" schemes.

The CFTC has joined the SEC in encouraging investors to research ICOs thoroughly before investing in the latest fad.

This week, we witnessed a notable pump scheme by third parties of U.CASH.

The price of U.CASH surged more than 100% on Monday only to crater back down to earth by the end of the week.

Joyce parroted concerns made by U.S. Treasury Secretary Steven Mnuchin on the use of Bitcoin in criminal activities around the globe.

Joyce was especially concerned about the lack of a paper trail when Bitcoin transactions take place.

The Cryptocurrency Everyone Will Regret Not Owning: Tom Gentile just revealed the No. 1 cryptocurrency he's buying right now. It's a little-known coin trading under $0.30 that he thinks could surge massively in the near future. Click here to see Tom's crypto pick and exactly how to trade it.

Pac Man was actually developed by Namco, not Atari.