Hashgraph is a new, decentralized public ledger that boasts faster and cheaper transactions than its chief rival, the blockchain.

Plus, we'll show you an incredible opportunity to profit from cryptocurrencies right now...

Here's Why Everyone Is Talking About Hashgraph Today

Cryptocurrencies - most famously Bitcoin - are powered by blockchain technology. The blockchain is what keeps Bitcoin secure, decentralized, and publicly verifiable. 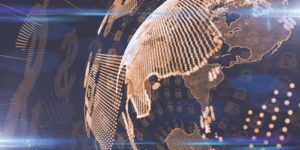 But the downside for Bitcoin is its transaction costs.

According to BitInfoCharts, Bitcoin transaction costs range from mere pennies to $10 per transaction, depending on how quickly users want their transactions completed.

Tacking on an additional transaction fee of $10 limits Bitcoin's use as an everyday payment method.

And considering Bitcoin's meteoric rise in price over the last five years - a 76,000% gain since 2013 - creating a way to improve on blockchain technology could be potentially lucrative.

But Hashgraph technology isn't quite there yet...

Is Hashgraph Better Than Blockchain?

There are three reasons to be skeptical that Hashgraph can take on the blockchain.

First, Hashgraph hasn't proven it can handle the workload of the blockchain.

Hashgraph has mostly been used in small, private applications, where its usage is tightly controlled. For example, Bloomberg reports that a group of 20 credit unions has opted to use Hashgraph technology to manage loan contracts.

That's not enough to convince us that Hashgraph can scale to Bitcoin's size and effectiveness.

"If and when used in a public setting, Hashgraph will face the same issues that other public blockchains are facing today and may not be able to maintain its security and performance," reports HackerNoon, a blockchain education site.

Second, Hashgraph's "proof of work" requirements aren't as robust as the blockchain.

Look at Bitcoin for instance. Using computer power to complete the calculations that comprise the blockchain (also called "mining") rewards users with bitcoins. This ensures that a robust network of users are dedicating their computing power to managing transactions on the blockchain.

But Bloomberg reports Hashgraph "doesn't involve the computation-heavy 'proof of work' effort to verify transactions" its competitors do.

That weakens Hashgraph's security and allows fewer users - even one user - to control the transaction ledger. That could be dangerous.

The blockchain has already been around for nearly a decade, and the coins running on the blockchain, including Bitcoin, have already become household names.

Unless Hashgraph can completely revolutionize the cryptocurrency space, it's unlikely to create a new profit opportunity for eager investors.

But that doesn't mean you have to miss out on the massive profit potential of cryptocurrencies.

We've uncovered a pattern in crypto trading that could unlock a $44,000 windfall for investors who know when to buy it...

The Secret to Making Money in Cryptocurrencies

It's too bad that the products you are promoting don't accept cryptocurrencies as a payment method. Would love to have joined up.

Tom, I have been wanting to get in on your program ever since you first issued the weekly money call. Haven't been able to get there yet. Thanks so much for that 1 recommendation. hopefully it will yield well so i can buy your plan. C.R.R.

Dustin, although proof-of-work is one of the more popular consensus algorithms used today by distributed ledger technologies, it is not necessarily the most secure (& certainly not the fastest, being slow by design). The other consensus algorithms are (1) leader-based, (2) economy-based, which is sometimes referred to as proof-of-stake, (3) voting-based, & (4) virtual-voting-based, which is used by hashgraph.

Hashgraph achieves asynchronous Byzantine fault tolerance, which is the strongest level of security possible in this category. It does this without proof-of-work with the novel "gossip about gossip" protocol, which intrinsically builds a cryptographically secure data structure. This data structure is called a hashgraph & contains the entire history of communication of the ledger. Using this as an input, the virtual-voting-based algorithm can be run to reach consensus without any further communication, such as solving a useless math problem.