On New Year's Eve 2017, your friends, family, and neighbors were celebrating by indulging in food, beverages, and fun.

But early investors were even more jubilant on Jan. 1, 2018.

No, they didn't get their dates mixed up of when to dance the night away... 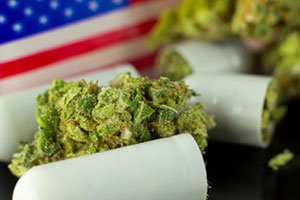 Forward-thinking investors knew Jan. 1 was going to be the single biggest day in the history of the legal cannabis market. That's when recreational California marijuana sales kicked off and created an absolute frenzy in The Golden State.

Fortunately, it's not too late for you to invest, because long-term investors will make the largest gains.

Just take a glance at the findings of Gallup polls over the years.

Do You Think the Use of Marijuana Should Be Made Legal, or Not?

You don't have to grow weed, sell weed, smoke weed, or even like weed to get rich from the California "green rush."

But if you don't invest in marijuana right now, you're going to regret it for the rest of your life. Marijuana is too big of an industry to stop, and right now is the best time to get in on the California pot stock explosion before things really take off.

It's the best chance Money Morning Director of Technology & Venture Capital Research Michael A. Robinson has ever seen to turn a small amount of money... even just $50 or $100... into thousands, even hundreds of thousands of dollars... in an incredibly short period of time.

Robinson is one of the top financial analysts working today.

In fact, his market-leading The Roadmap to Marijuana Millions - a comprehensive pot stock investing guide released last year - has been a runaway hit, with nearly 100,000 copies claimed in just the last few months alone.

In this report, Robinson personally vetted and recommended America's most lucrative pot stocks... which helped investors make an absolute fortune with massive windfalls.

This is a market that is on fire - with no shortage of windfall opportunities...

All told, at least 21 marijuana stocks surged over 1,000% during the last year.

Of course, past performance is never a guarantee of future results.

And quadruple-digit gains aren't exactly commonplace in the stock market.

Robinson wants to make it very clear: Penny stocks are riskier and more volatile than your run-of-the-mill stocks.

But this is exactly what makes investing in pot stocks so exciting right now during this early pioneer phase.

When the billon dollars start pouring into the California recreational weed market, these small companies could see their revenue quadruple.

He's narrowed it down to the three best firms.

Robinson's colleagues know that he's a conservative guy. He would rather under-promise and over-deliver.

But even based on his most conservative estimates, his projections show you could pocket 15,251% profits or more over the next 12 months from these tiny startups.

If you want to cash in on this historic opportunity, this is your ticket...

Ok guys! My investment partner and I invested $2000 in pot stocks at $.02 up to 97.00 pershare…. We've invested in 13 stocks that we found in the Roadmap Book that y'all publish, in it for the long haul.
So NOW….we are watching and as we have all seen the market is
very volatile. One stock in particular it was said in an email just yesterday that Easton Phamra is up some percentage over 1000….Why are we still seeing this stock we own at $.02?
Why is our EAPH still at .02 and WHERE o WHERE is the one with over 1000% gain? We have 5000 shares in our EAPH…must not be the right one?!
Thanks for your input/explantation….we're waiting!!!
Katherine

If you look back on where Easton Pharma was it was probably at something like a fraction of a penny….say .0025 cents. You would then have your gain of 1000% or more when it went to .02 cents. All the best with your investment!
Hold on to your pot stocks, because they will make you a lot of money long term.