…that the government is coming for digital assets.

In fact, just this week lawmakers have pushed for cryptocurrencies to be regulated by the SEC.

But we're not worried, and you shouldn't be either.

On Feb. 7, McAfee asked cryptocurrency investors on Twitter what they believed to be the greatest threat to the future of digital coins… 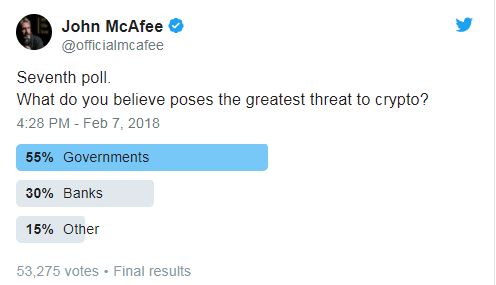 Of those who responded to McAfee's survey, over half voted that "governments" pose the greatest threat to cryptocurrencies.

It's not hard to see why…

Bipartisan momentum has grown in both the U.S. Senate and House of Representatives for action to address the risks posed by virtual currencies to investors and the financial system.

"But if it's a currency that could destabilize the whole economy, you're going to have that conversation," Brat added, according to Reuters.

Indeed, legislators from across the aisle are currently sounding the alarm on cryptocurrencies, claiming they aid and abet money laundering and terrorist financing schemes, while hurting consumers with their volatility and undermining trust in the global financial system overall.

In fact, policymakers on Capitol Hill are pushing for digital assets to be regulated as securities and subject to the U.S. Securities and Exchange Commission (SEC) investor protection rules.

The SEC, for its part, agrees with Washington.

As does the U.S. Commodities and Futures Trading Commission (CFTC).

Federal Regulators Are Pushing to Control the Crypto Market

"We must put in place sound regulatory frameworks," Giancarlo said during his testimony, referring to federal action.

Currently, cryptocurrency guidelines in the United States exist as an amalgamation of ambiguous state regulations.

Committee Chair Mike Crapo (R-ID), however, seemed all too eager to give Clayton as much control as he wanted over the crypto markets. He asked the SEC chair if the commission would specifically need more legislative power in order to install such federal framework.

"I think we may," Clayton admitted, without elaborating on the extent of the additional power he would want.

Regardless of Clayton's ambiguity, one thing's for sure: Crypto regulation in the United States is at the forefront of legislators' minds, just as the voters in McAfee's poll feared.

For starters, the ambiguity in the panel discussion alone proves lots of time and talking still need to go down before the federal government imposes any new crypto rules.

And even if future regulations do send crypto prices south, that doesn't mean you can't profit.

You see, there's a way that you could make eye-popping gains from crypto before and after federal regulators strut their bureaucratic stuff.

And this expert can show you how to do just that…